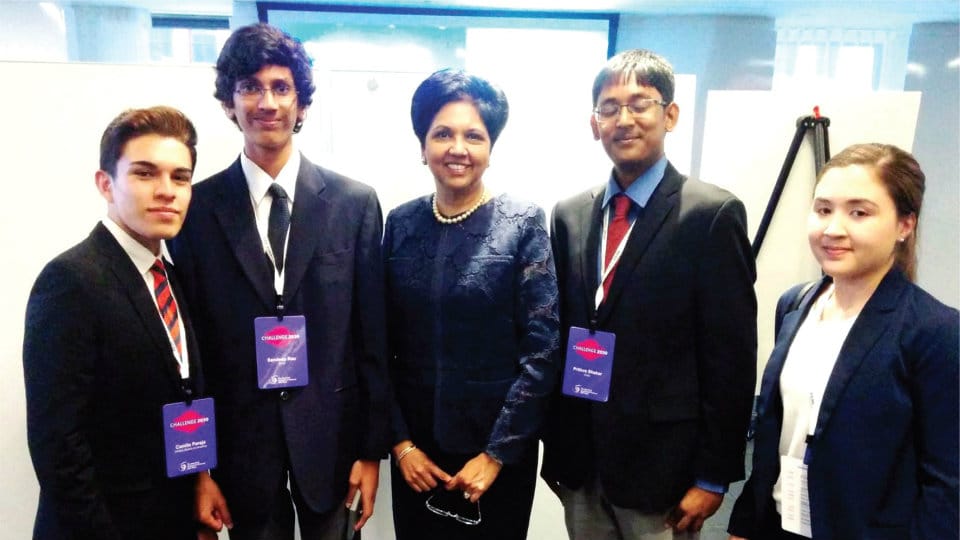 Mysuru: Two students of Excel Public School in city — Sandeep Rao and Prithve Kiran Shekar — studying in tenth standard, had the rare distinction to present their research-based product at The New York Academy of Sciences recently before a congregation of Nobel Laureates and leading scientists from across the globe.

The research product titled ‘Vita Tech’ was selected by the Academy by merit. It was presented to a consortium of scientists and scholars that marked the Bicentennial Celebrations of the New York Academy of Sciences (founded in 1817), on May 8 and 9.

This project was taken up in response to the challenge given to student-members of The Junior Academy to develop their research into a product that would align with at least one of the 17 Sustainable Development Goals (SDGs), proposed by the United Nations with the targeted completion by the year 2030. The theme of this programme was Tomorrow’s Innovators Tackle Today’s Grand Challenges. The project ‘Vita Tech’ was fully sponsored by PepsiCo.

Sandeep and Prithve formed a team with two other students from the US and Canada, that worked under the mentorship of Dr. Ranjit Sahu, Virginia, USA. This research was an attempt to come up with a solution to eradicate the high prevalence of malnutrition throughout the world. The team was awarded full scholarship to travel  to New York City.

This is the third event in a row that the Junior Academy, New York, is selecting the students from Excel Public School. Sandeep is the son of Deepika and Ashok Rao while Prithve is the son of Roopa and Kiran Shekar, residents of Mysuru.