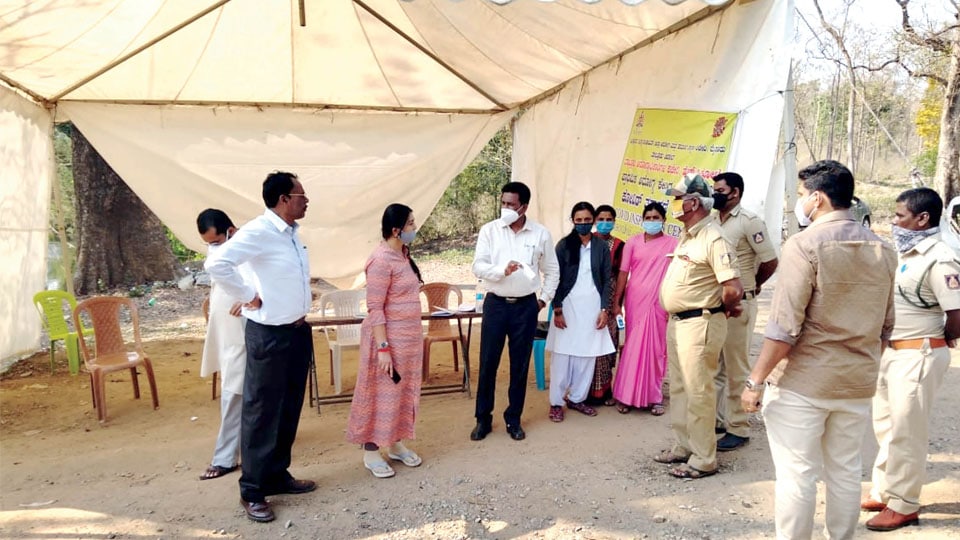 Mysore/Mysuru: Health and Revenue Officers of H.D. Kote taluk have intensified checking on Karnataka-Kerala border in the wake of recovery of three fake RT-PCR negative reports produced by Kerala visitors to enter the State in last two to three days.

Recently, Kodagu District Authorities came across fake negative report carried by some visitors from Kerala which has made the State authorities to become vigilant.

At Bavali check-post, the Health Department staff came across three fake test reports and those visitors were sent back to Kerala with stern warning. Close on the heels of this incident, H.D. Kote Taluk Health Officer (THO) Dr. Ravikumar and Hunsur Assistant Commissioner Veena inspected the Bavali check-post.

They were informed that Health Department staff are working in shifts to keep an eye on Kerala visitors. An Ambulance is stationed at the check-post to take visitors for testing in case they failed to produce RT-PCR report.

Health Department personnel from Taluk Hospital and Vivekananda Memorial Hospital are working in shifts to examine people from the neighbouring State.

The THO said that RT-PCR test was done at eight places in the taluk.

On Saturday, 384 tests were done. Out of three positive cases, two were sent to Mysuru District Hospital and one was under treatment in the Taluk Hospital. “We are taking all measures to stop Kerala tourists from entering our State without negative report,” he added.