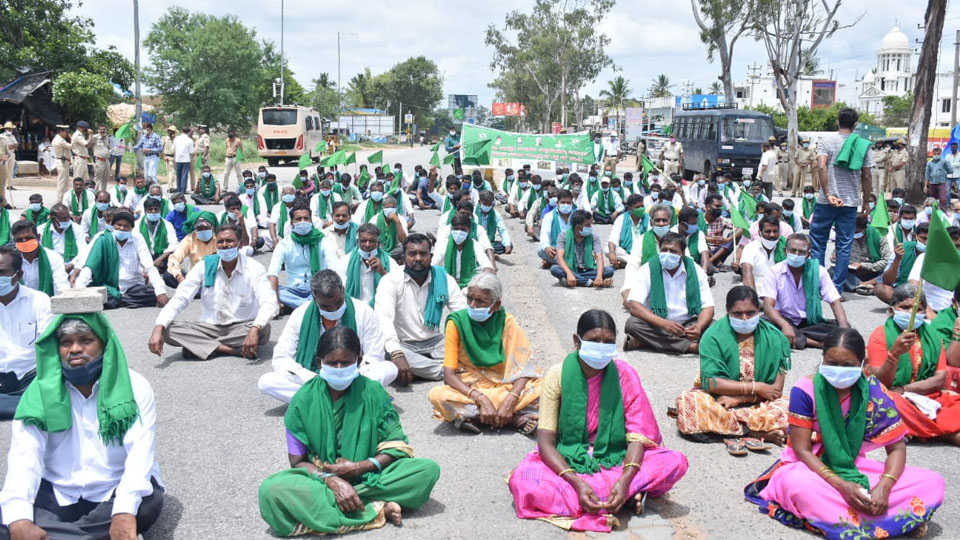 Mysore/Mysuru: Traffic on the ever busy Mysuru-Nanjangud Road was disrupted for over an hour this morning as farmers under the banner of Karnataka Rajya Raitha Sangha (Samoohika Nayakatva, meaning mass leadership) staged a rasta-roko (Road blockade) as part of the Statewide demonstration, near APMC Market on Mysuru-Nanjangud Highway.

As farmers blocked the Highway, the Police diverted the vehicles via Uttanahalli road.

Maintaining that the amendment to Karnataka Land Reforms Act sounds a death knell to the farming community, the farmers urged the Government to withdraw the amendment.

Alleging that the Government was out to turn farmers into beggars by making amendments to the Act, the protestors warned of a massive movement if it went ahead with the amendment.

The farmers winded up the demonstration by presenting a memorandum to Additional DC B.R. Poornima, who visited the spot.

In another protest over the same issue, members of Dalit Sangharsha Samiti (DSS) staged a demonstration in front of the Deputy Commissioner’s Office this morning.