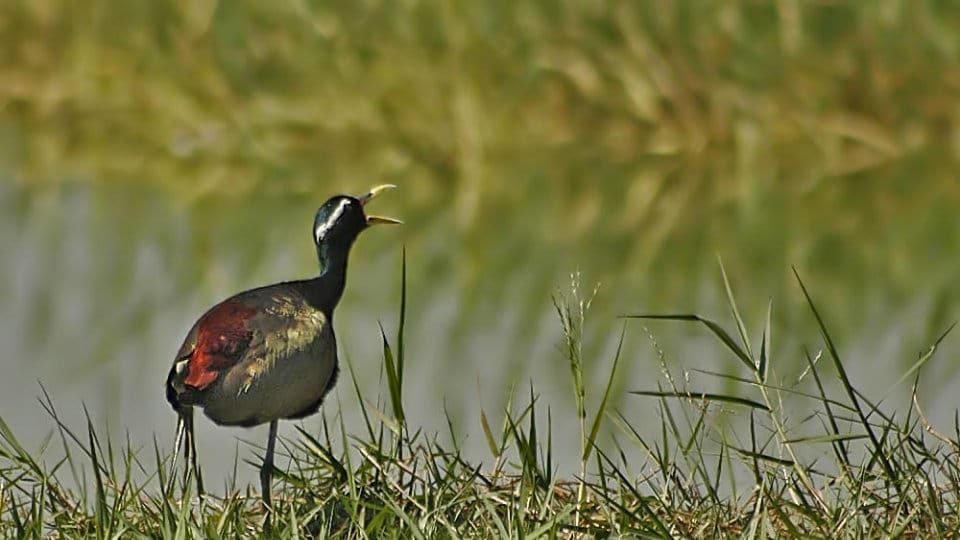 Mom, both in human world and animal kingdom, is often the first to get the due respects when it comes to raising children. But let us not forget to give dad the credit where credit is due. The best dads in the animal kingdom will go to great lengths when it comes to parenting, sacrificing their very lives for their children. This Weekend Star Supplement profiles Jacana bird that will go any extreme to become a dad. Jacanas are found in the Lakes of Mysuru including the Karanji Lake and the Kukkarahalli Lake. He minds the nest while she takes more mates

God could not be everywhere so he created Mothers” is an old saying which is very true. For, without mothers, generations will come to a halt and species will not take birth and thrive. In nature, mothers are indispensable – to nurse, up bring, train and make the offspring fit for life’s dangers.

Fathers, on the other hand, are not as indispensable as mothers. Except for some species of animals, it is the father that does everything to bring up the offspring from birth until fit and independent to lead a life. There are quite a number of species doing this ‘reversal of role’. But for now, we will take a look at the ‘Feathered Fathers’ – fathers of the bird kingdom who devote their life and raise offspring without the help of the mother rather mothers in any manner. The offspring does not even know who its mother is. Such is the marvel of nature in creating the feathered fathers. 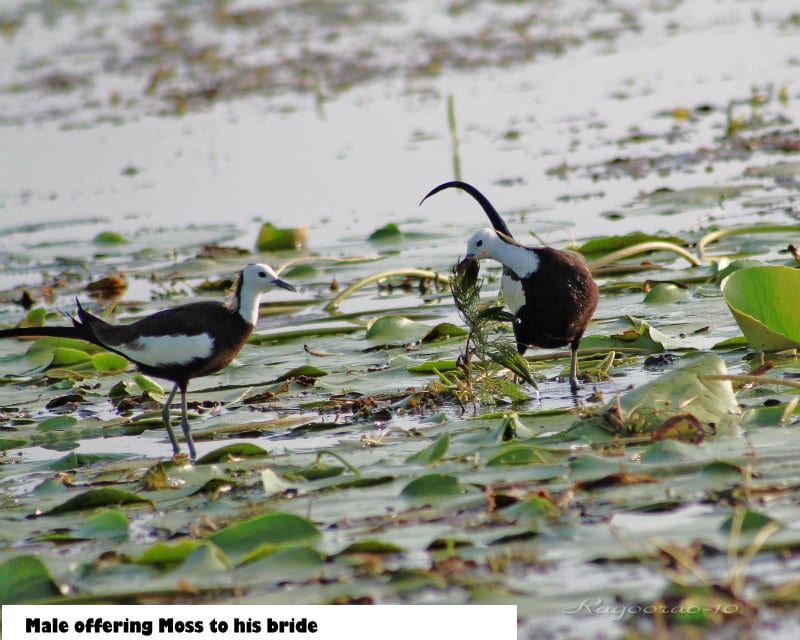 The Great Ostrich, the biggest of the birds is a father worth reckoning here. He does all the roles of a mother and a father to the offspring of many mothers. Right here in Mysuru, at our lakes, the Karanji Lake, the Kukkarahalli Lake and Hebbal Lake we have such devoted fathers of the bird kingdom – The Pheasant-tailed Jacana (Hydophasinus chirurgus) and the Bronze-winged Jacana (Metapodius indicus). Jacanas are also known as the “lily trotter,” thanks to its ability to “walk on water” by balancing on lily pads.

Polyandry is practiced by females of the Jacana family like many more species. The Jacana, pronounced as “Ja-ck-na”, the multi-coloured birds, Pheasant-tailed with a brownish body, white head, yellow neck and a black garland-like collar, with sickle-shaped long-tail feathers, like a Domestic Rooster with very long legs and toes that are disproportionate to the size of the bird. 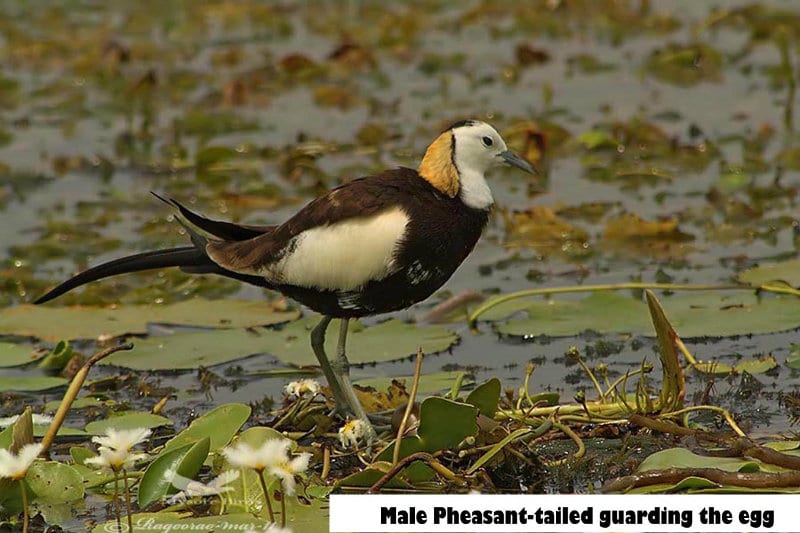 Nature has endowed them with such legs and feet enabling them to walk on lotus and lily leaves, earning them the name “Lilly-Walkers or Lilly-trotters”. The other species – Bronze-winged Jacana a Violet-bluish black bird, iridescent feathers and a yellow beak and Shiny Bronze-coloured wings, as the name suggests – is more abundant in our urban lakes than the Pheasant-tailed which keeps to the secluded lakes.

Both are amazing fathers – when the time for breeding approaches, with weather and food conditions being favourable, the males start searching for a good nesting site. Both the species build a floating nest made of weeds, aquatic plants and mosses. Once the site is selected, the males guard the site fiercely from other rival males. 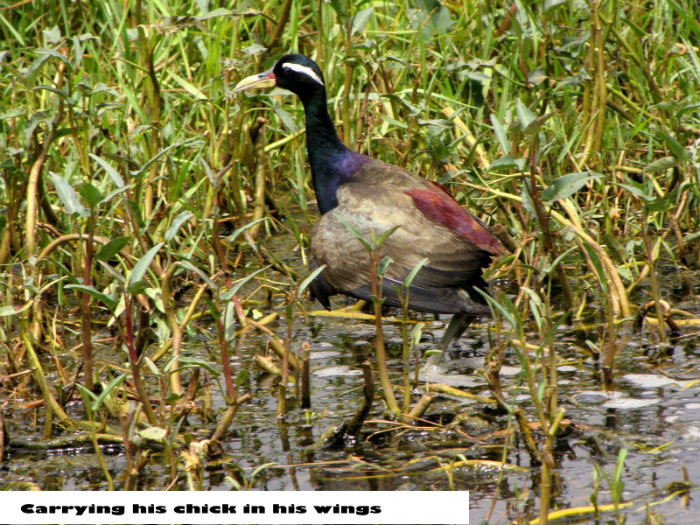 The courtship is a simple but ritualistic event. The wandering promiscuous females, on the lookout for a willing male to take care of their seasonal urges and responsibilities, approach a male who has a nesting site reserved. The male, welcomes her by offering her a beak-full of moss or aquatic plants. If the female is satisfied with male’s abilities to have a nest and be a father to her kids, accepts the gift.

Then it is the nature that takes over. They mate and she stays for a few days with him while he finishes his nest building. Then she lays a single brownish spindle-shaped egg in the nest. Then they are strangers again. The female walks away as though nothing has happened or she is not responsible for whatever happened. She just shakes her tail and goes off on her way looking for another willing male.

Now our dutiful husband and father, lovingly and caringly fondles the egg, tucks it safe in the nest and further fortifies the nest. This incubation goes on for 28 days and the devoted father does not leave the nest or take his attention away from the egg for the entire period. This he does  for, he is aware of the plenty of prowling predators like mongoose, monkeys, foxes and the latest threat the feral dogs waiting to make a future Jacana a mid-day snack. The time comes for the chicks to hatch and the father knows it’s time. For, he can hear the chick chirping and pecking inside the egg itself. Once the chick comes out, the father is all love for the chick. His world flips and he takes care of the chick, takes it around inside the reed beds and vegetation to keep it safe from air-borne predators like the Brahminy Kite and the Marsh Harriers. The chicks grow fast and get strong enough to scamper into the vegetation whenever the father alerts them of intrusion or a threat.

Protecting the chicks from all dangers is an art to be seen in these devoted birds. When threatened with persistent intrusion, the fathers initially take the chicks under their wings and literally carry them away like we humans do with our kids – like holding them in his arms and sulking away.

If intrusion persists, the next step is to tuck the chick safe in a reed bed and then making himself available and get noticed deliberately to distract and draw the attention of the intruder by jumping up and down repeatedly in the air like a YOYO, calling loudly. The frenzied calls and the jumping act distract the intruder and goes after him, leaving the chicks alone. Then the father flies away from the scene and then sulks back to the chicks’ hiding place. The intruder is utterly confused and leaves while the chick is safe, the father is happy. But at what cost, risking his own life and exposing himself deliberately to a predator. 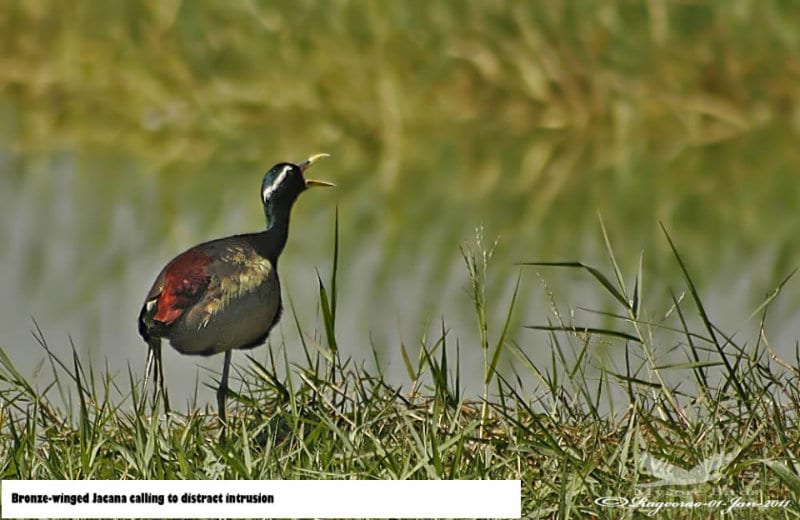 As the chick grows fast, the father is lessened of his burden and in a few weeks, the chicks are mature. The Jacanas live a solitary life till the time for another breeding season to start.

A dutiful father, who does everything including risking his life for his child, has rightly been judged and called one of the “TOP TEN DADS OF THE ANIMAL WORLD.” 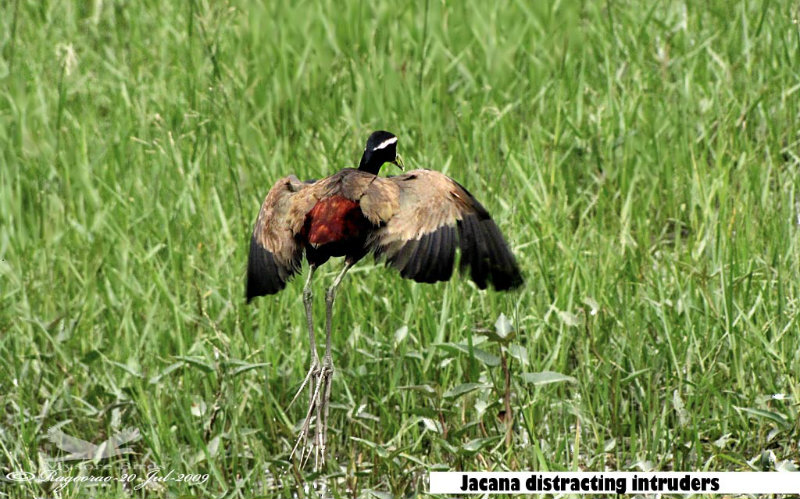 Long live the Jacanas, if at all we allow them to live.

Why do Jacana males do this ?

What kind of dad stays home with the kids while their mother is out having sex? A jacana dad — even when he knows that he’s being cuckolded and the offspring he’s minding may not be his.

Several species of Jacana are among the animal world’s most extreme cases of sex-role reversal, say behavioural ecologists. An assertive female collects a harem of up to five smaller males. In the span of about a week, she lays four eggs in one male’s nest while continuing to mate openly with him and others — as many as 65 matings for one clutch. 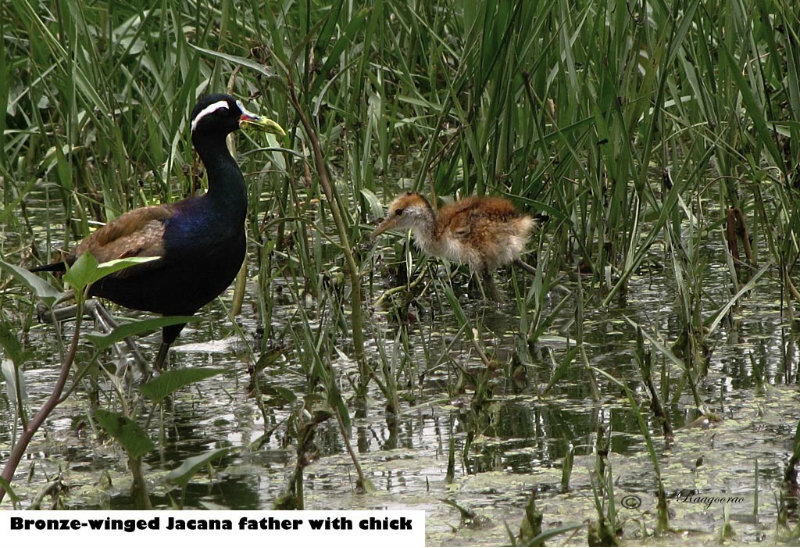 Even in monogamous bird species, a female may sneak copulations elsewhere. Researchers say that for a Jacana male with a promiscuous partner, the risk of raising unrelated young may be as high as 75 percent. In other words, he is seen her mating with others, yet for three months he incubates eggs and raises chicks unlikely to all be his.

Why do the males do this? Basically, they’re stuck, researchers say. Hunting for a less promiscuous female would take time better spent trying to sire eggs. This way, although they may end up with other males’ kids, they also achieve the biological imperative of having their own.  (Courtesy: National Geographic)