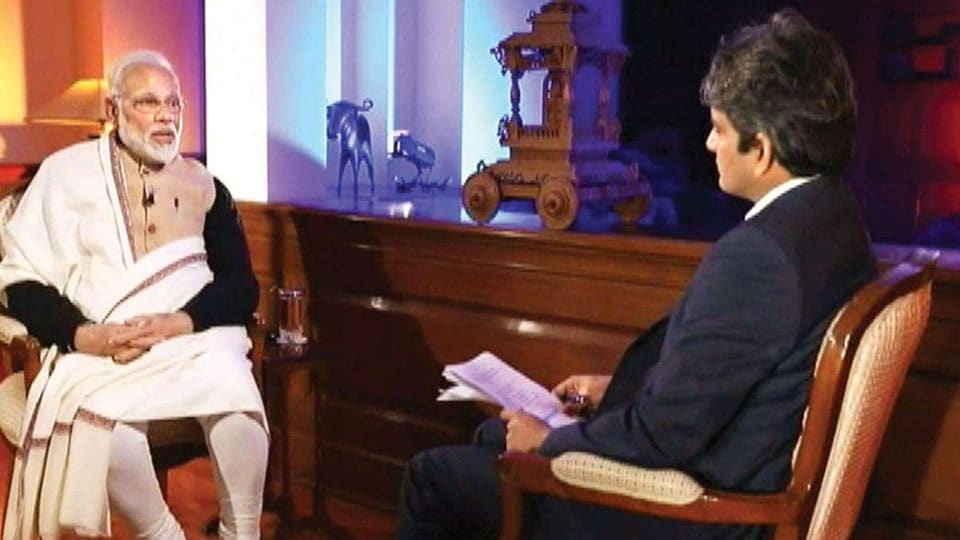 Prime Minister Narendra Modi is all set to travel to Switzerland to participate in the World Economic Forum (WEF) in Davos. The PM will leave for Davos on Jan. 22 for a two-day visit. At the WEF summit, Modi will deliver the keynote address at the plenary session on Jan. 23.

This will be the first participation by an Indian Prime Minister in the WEF in over two decades. In 1997, the then Prime Minister H.D. Deve Gowda had attended the Davos summit. Ahead of his visit to Davos, PM Modi spoke to Zee News Editor Sudhir Chaudhary yesterday.

This was his first interview in 2018 and Modi spoke on a host of issues including country’s economy, demonetisation, Goods and Services Tax, foreign policy and India’s growing influence in the world. He discussed his vision and perspective on foreign policy and growth potential, world power among several other topics.

“The world wants to communicate directly with India,” Modi said when asked how he sees India’s status at the WEF 2018.

Here are the excerpts of the interview…

India at WEF meet in Davos

“Davos is a major platform in the financial world. Top business leaders gather there to deliberate upon the economic future of the world. India is the centre of attraction for the entire world. There are two reasons for that. First, our GDP is growing at a fast pace and this has been accepted by leading agencies like the World Bank, Moody’s etc. Second, due to our strong democratic values – it’s a unique combination of both in India. And that’s what has evoked everyone’s interest. So it’s an opportunity for India to showcase itself on a global platform like WEF in Davos,” said PM Modi.

“They said my understanding was limited to Gujarat. I made it my strength. I did not follow protocol. I was a simple man with no baggage. I made friends the world over.”

“My government has only one agenda for Budget and that is development. And that’s what you will see. India has been instrumental in bringing world’s attention to financial transparency. It was acknowledged by former US President Barack Obama.”

“Good things should be appreciated and bad things should be denounced – that’s the role of democracy. In the age of ‘Google Guru,’ it’s easy to find out accusations as well as other facts. We need to be proactive in today’s world. Criticism is important in a democracy. However, we faced less criticism and more allegations.”

“Lakhs of women would cook food on firewood. But today gas connection has reached so many homes. Government is providing insurance to poor   families in 90 paise and so far, over 90 crore families have availed it. LED bulbs have been installed across lakhs of homes across India. All this doesn’t count as work?”

“Don’t evaluate me on demonetisation and GST only. We brought economic reform. The success of GST lies in the power of the federal structure. It takes time to adjust to change, but the outcome will be good. India elects us to make reforms, not to win elections. If our reforms are for the benefit of the citizens, then the elections will reflect that, like we have seen in Uttar Pradesh, Gujarat.”

“Before 2014, the world didn’t care about what India had to say. But after we came to power in 2014, the situation changed completely. For the first time in 30 years, India has a government with a full majority. This was noticed by the entire world. I witnessed it during the SAARC and G-20 meet. They are accepting us as a leader now. That’s because we have done well on the domestic front. From day one, my government’s focus has been on good governance, transparency, and this has given us results. India’s ranking in ease of doing business jumped from 142 to 100. This resonated across the world. We have the mandate of world’s largest democracy – 125 crore citizens.”

“In one year, more than 70 lakh provident fund accounts have been added. Over 10 crore people have benefited from Mudra Yojana launched by the Centre. Government initiatives have empowered small-scale entrepreneurs and informal sectors.”

“If someone opens a ‘pakoda’ shop in front of your office, does that not count at employment? The person’s daily earning of Rs. 200 will never come into any books or accounts. The truth is massive people are being employed,” he said, further adding about GEM Yojana – an online portal launched in association with all States.

On India in the world sphere

“It was a bipolar world earlier. Now it is multi-polar/ interconnected. In this condition, you have to be proactive and tell the world about yourself. I brought up demonetisation at G20, and it was discussed that financial transparency in the world should be led by us.”

READ ALSO  Of victories and defeats in electoral politics: Thoughts on the results of elections in five States

“This government’s achievements wouldn’t be possible without support from the bureaucracy. The government machinery works with you when they see their leaders are working without any malice.”

On Casteism and Politics

“It is our country’s misfortune. I think politics should be done on development, integrity,  performance and the future of the country.”

I campaigned on similar lines during Gujarat Chief Minister days. What’s new in this?

Prime Minister Modi said that he does not waste his time on calculating numbers for upcoming elections and his daily schedule is very busy to wonder about seats and polls. “Over 125 crore citizens have given me the mandate to be here. I do not have the time to think about next elections,” he said.

“I want my nation to utilise me to the fullest, squeeze the most out of me. I am ready to put in my full.”

Assembly, Lok Sabha polls must be held together: PM

One election after another, the focus of the politicians gets divided. So let’s just do it one particular time. Elections absorb massive manpower. A State’s 80 to 100 top officers are acting as Election Observers. How will the State function? Soldiers are on election-duty for 100-200 days in a year. Our idea is to create a planned election system where the polling could be held on a certain week across the country at one time.”

“Logically speaking, holding different elections in different dates creates a burden on the exchequer. Politicians are always under stress. So I think both Vidhana Sabha and Lok Sabha polls should be organised simultaneously. It will save money and manpower. The voters will also find it convenient to come out and vote at once.”