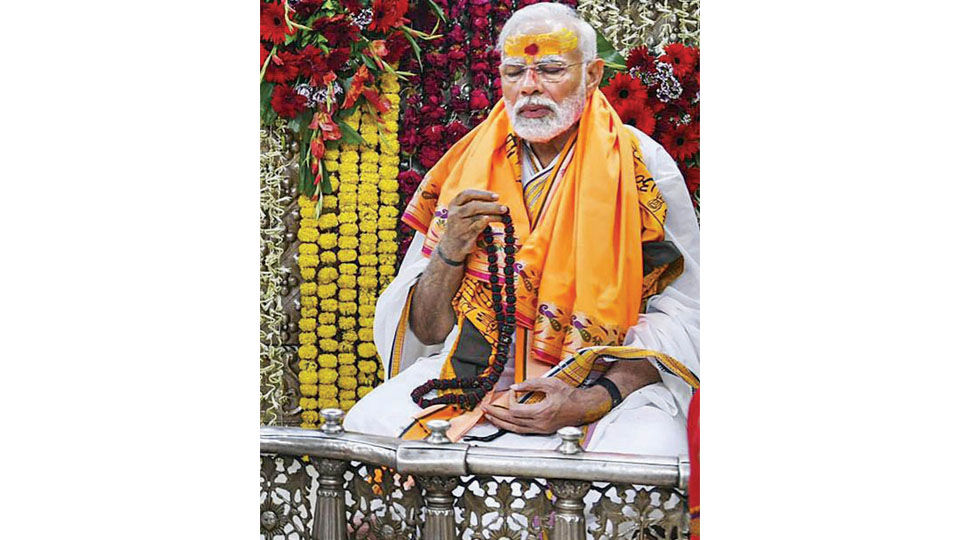 Among one of the most popular Hindu mantras is Om Namah Shivaya. It means salutation to Lord Shiva, the most important Godhead of the Hindu pantheon. Shiva is one of the three primal divinities of Hinduism, namely Brahma (the creator), Vishnu (the preserver) and Shiva (the destroyer). This is also known as Hindu Trinity. The belief is that if one chants this mantra 108 times every day, it will help the person to purify his body and Lord Shiva will shower his blessings on him. Let it be.

Yesterday Prime Minister Narendra Modi inaugurated the first phase of the mega ‘Mahakal Corridor’ project of Mahakaleshwar Jyotirlinga at the temple in Ujjain, Madhya Pradesh, dedicated to Lord Shiva and I watched the happenings on TV. It is one of the 12 Jyotirlingas, shrines, considered the most sacred abodes of Shiva — apart from Mount Kailash, I guess. It is located on the side of the holy river Shipra.

Most of the Hindu temples are located either on top of a hill or by the side of a river. Only in urban areas, cities, they are anywhere — the urban divinities to protect people from urban naxals!

After Narendra Modi became the Prime Minister in 2014, which will go on till the next elections in 2024, the destroyed or desecrated Hindu temples seem to be rising again like phoenix, getting purified and sanctified by the Prime Minister himself. And all of them seem to be happening in North India, obviously for the reason the vandalism of Hindu temples happened due to frequent invasion of North India by the foreigners. That way South Indian temples, except for a few as in Vijayanagar in Karnataka, built with stones on strong edifice have stood the test of time, of many centuries. Look at the Rameshwaram Temple, the Brihadeeswara Temple at Thanjavur, the Madurai Meenakshi Temple in Tamil Nadu, Sri Kalabhairava Temple near Tirupati, Tirupati Venkateswara temple itself, Sree Padmanabhaswamy Temple in Thiruvananthapuram and many more.

Apparently, North Indian temples took the beating and now Prime Minister Narendra Modi is all set to perform an ‘Ashwamedha Yaaga’ — a ritual performed by rulers to prove their imperial sovereignty. Here, it can be said, to reclaim the lost Hindu heritage due to the oppressive invaders who ruled Hindustan for centuries.

But some say Modi is reopening the wounds of history which is not good for the 21st century and the future of the country. However, it must be remembered that the ‘wound’ was caused more to the soul of Hindu India than to the physical structure of the temples. Therefore, we can say, Modi is the renaissance man for Hindus of India. Any wound caused to the body may be healed, but the wound that is caused to the soul cannot be healed unless the physical wound is healed without warts left there as a reminder of the humiliation suffered.

After independence of our country in 1947, we have had 14 Prime Ministers from different political parties with different ideologies. But no Prime Minister worked to heal this wounded Hindu civilisation, not even Atal Behari Vajpayee who took cover under what he called ‘compulsions of a coalition Government.’ Therefore, it can be said that in the past we had Hindus as secular Prime Ministers, but in Modi we have a secular person as a Hindu Prime Minister to correct the historic wrong. After all, it was Hindus who had suffered, not non-Hindus. Despite this truth, under the protective secular umbrella of our Constitution, Hindus are excluded from being addressed of their wounded souls, despised beliefs and desecrated temples. Modi apparently is now addressing this issue also apart from his ‘Sabka Saath, Sabka Vikas’ programme of including every citizen excluding none.

Be that as it may, what is revived at the Shakti Peeta in Ujjain (ancient name Avanti), is not just a temple but also the place of learning and culture. Ujjain was the capital of Gupta Empire (4th century CE to late 6th century CE). Till I heard on TV, I did not know that Lord Krishna had his education at Avanti Peeta where he had met his friend Kuchela, the poor man later in life, who could treat Krishna only with the food of beaten rice when the latter visited him.

In the panel discussion when asked: “Was not tax-payers’ money squandered for this kind of projects?” the answer was in the negative but with an explanation. Hindu temples are legally taken over by the government, exceptions apart for reasons. All temple offerings and donations go to the government. And only a small part of this devotees’ money is now spent for these temple projects. If so, it is a paradox that the benign principle of secularism does not seem to apply to the believers of Hinduism because there is discrimination and also denial in the government taking control of temples.

No matter what the perception is, Hindus, nay Indians, cutting across their pernicious systems of caste, creed and other divisive barriers of religion, language, culture etc., are now getting connected to their ancient culture which may bind Indians together.