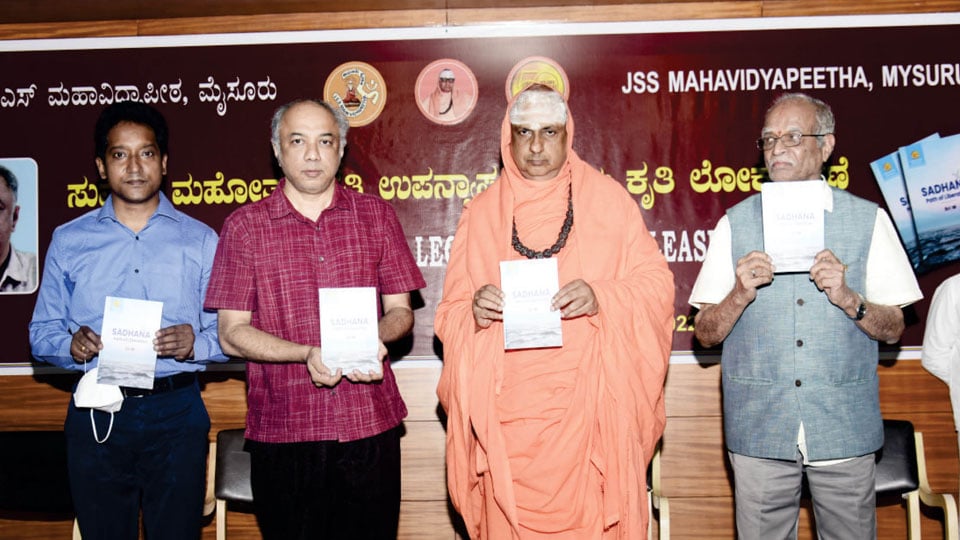 Mysore/Mysuru: Social Entrepreneur Dr. Harish Hande, Co-founder of SELCO Solar Light Pvt. Ltd. and a Ramon Magsaysay awardee, said that finding long-standing solutions to problems is more important than just complaining about them. He was delivering a talk on the topic ‘Poverty and Sustainability’ of the 11th lecture series organised as part of the Golden Jubilee celebrations of JSS Mahavidyapeetha at Sri Rajendra Centenary Hall in JSS Hospital premises here recently.

Maintaining that the tribe of complaining people is on the rise in the country, Dr. Hande observed that at the same time, the number of those trying to find solutions for problems and issues  is rapidly decreasing.

Stressing on the need for not wasting time on complaining, he said that the first priority should be finding solutions.

Pointing out that Indians are a talented lot, Dr. Hande said that everyone should take up responsibility for solving problems as everyone of us are capable of it. Noting that India too is facing problems just like many other countries, he said that doing work sitting in the comforts of offices is not enough for resolving issues.

Stating that the COVID pandemic which struck the world, had resulted in a few becoming millionaires, while crores of others were pushed to poverty and penury, Dr. Hande opined that the subsidies enjoyed by the rich are indeed the hard work put in by the poor. But despite this fact, our administrative system is against the poor, he observed and added that youths should come forward for ending poverty and solving livelihood issues.

Suttur Mutt Seer Sri Shivarathri Deshikendra Swamiji, who graced the occasion, said that though the country is mired in problems, there are solutions for all of them. Noting that in the past, the villagers were finding solutions to problems at the village level itself, he said that people should have a greater understanding  for ensuring that problems to do not surface. Contending that poverty does not come in the way of sustainability, the Seer observed that there should be no discrimination in any of our social works. Service to mankind is more important than money, he said adding that it is better to become an ‘asset’ of crores of people rather than becoming a ‘crorepati.’

DC Dr. Bagadi Gautham, in his address, lauded Suttur Mutt for its yeoman service to society. Pointing out that the lecture series will be much useful for students, he emphasised on the need for moving ahead in life while realising that solutions to problems are nearer.