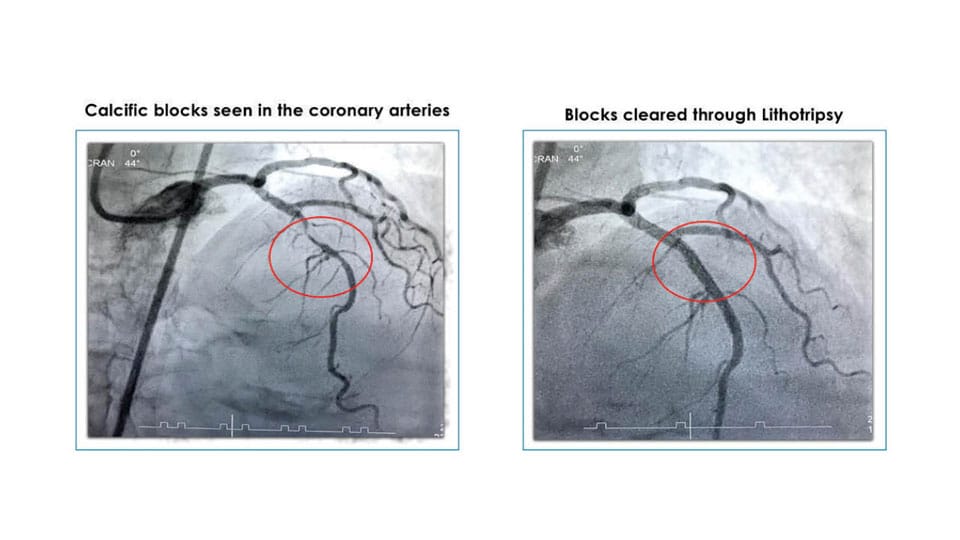 Mysore/Mysuru: The first Coronary Lithotripsy, a new form of treatment for clearing calcific blocks in the coronary arteries, was performed on an 80-year-old lady at Apollo BGS Hospitals by Dr. Arun Srinivas, Chief Cardiologist and Head of Heart Institutes, Apollo BGS Hospitals, Mysuru and team.

Lithotripsy is an ultrasound based treatment which was being used to treat kidney stones since many years. The use of sound waves to treat blockages in the heart coronary arteries is a new application of the ultrasound principles. Due to its ease of use, it is very effective and safe especially for elderly patients with coronary calcification.

Speaking about the coronary calcification, Dr. Arun Srinivas said “The presence of calcium in the coronary arteries is a common occurrence in patients with chest pain and heart attack, especially in those aged above 55 years. It is an indicator of poor outcome with routine angioplasty and stent implantation and can cause recurrence of blockages (restenosis) even after a drug eluting stent procedure.”  Explaining the Lithotripsy procedure, he said “The coronary calcification is routinely cleared by a drilling device called ‘Rotational Atherectomy’ prior to the stent. But Coronary Lithotripsy is easier and safer for the patient and simpler to perform than the Rotational Atherectomy.”

Apollo BGS Hospitals Vice- President and Unit Head N.G. Bharateesha Reddy said “We are the first Hospital to provide both Rotational Atherectomy and Intra Coronary Lithotripsy for the treatment of Coronary Calcification in Mysuru. Both these modalities can avoid the need for coronary bypass surgery in many elderly patients which also requires prolonged hospitalisation.”

The patient undergoing the Lithotripsy procedure was discharged after 48 hours and has returned to her active life, he said and added that to address the healthcare needs of the patients during the pandemic, Apollo Hospitals has launched Apollo 24×7 app to connect with the doctors virtually anytime anywhere and Askapollo.com to book doctor appointments.  For more details call Mob: 98802-33054.