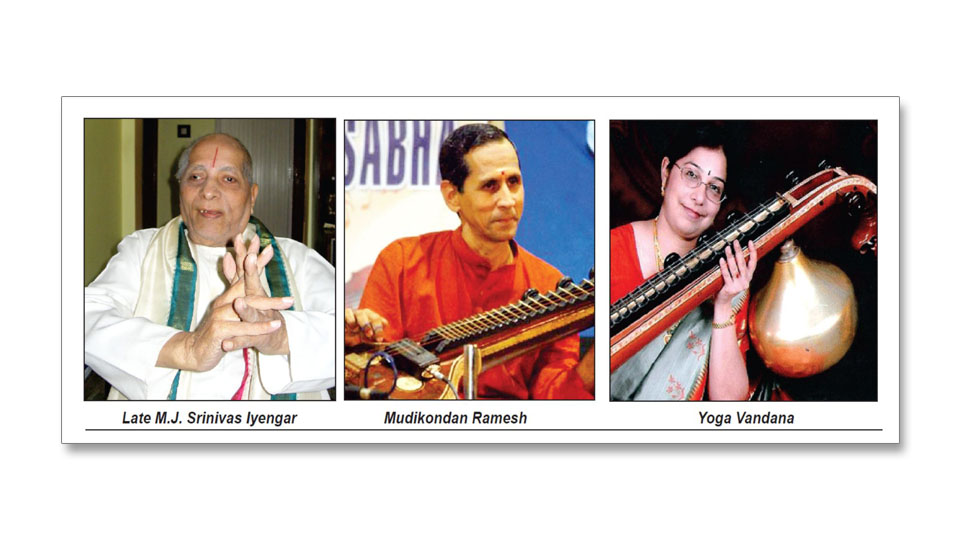 Five music concerts at Nadabrahma Sangeetha Sabha from May 26

Sri Nadabrahma Sangeetha Sabha has organised five concerts from May 26 to 31 at the Sabha premises on JLB Road in city.

Veena Guru late M.J. Srinivas Iyengar Memorial Concert will be on May 26 and 27; Sangeetha Kalanidhi Mysore K. Vasudevacharya Memorial Programme on May 28 while flute wizard T.R. Mahalingam Samsmarana programmes  will be from May 29 to 31.

On May 26 (Saturday) at 6 pm, for Veena Gana Sambhrama, Mudikondan S.N. Ramesh will give a veena concert accompanied by C. Cheluvaraju on mridanga and G.S. Ramanujan on ghata.

On May 27 (Sunday) at 5.30 pm, for Veena Gana Sambhrama, Yoga Vandana will perform on Veena while A. Radhesh on mridanga and Vikram Bharadwaj on ghata will accompany her.

Both the events are sponsored by MJS students and family.

Ramesh has been performing veena concerts for more than four decades and has travelled extensively  on solo concerts and group performances with eminent artistes which were well-received by the western audience.

A rare blessing to learn advanced sessions while performing on stage itself came from the doyen, Violin Vidushi A. Kanyakumari in Vaadhyalahari, an Instrumental Ensemble in which he has been performing for more than two decades along with Mambalam MKS Siva on Naadaswaram. He is an ‘A Top’ ranking artiste of All India Radio, Chennai.

Apart from Karnatak concerts, he has also teamed up with Hindustani artistes Pandit R. Janaardhan Mittaa and Pandit R. Visweswaran for Jugalbandhi concerts.

He has received awards from several musical organisations and has also been honoured as the Aasthana Vidwaan for Sringeri Sri Sarada Peetam and Sri Kanchi Kamakoti Peetam.

Yoga Vandana was born and brought up in a rich and cultural ambience — both musical and literary. Her mother V. Chandrakala, a gifted vocalist, has been a constant source of inspiration. Her father Prof. Veturi Anandamurthy, a Telugu littérateur, who researched extensively on the works of Tallapaka Annamacharya also guided and encouraged her in her musical endeavours. Hailing from such a background, she developed a natural flair for music. Presently residing in Bengaluru she continues her Sangeetha Sadhana ably supported by her husband J.V. Kamesh, himself a connoisseur of music.

Encouraged by learned mentors and her mother, she started her training in vocal music at a very tender age. However, due to a deep fascination she had for the Veena, she commenced her training on that instrument in all earnestness.

Having her early lessons in Veena under Sridevi and K. Subhashini Shastri, Vandana was subsequently trained by the eminent Veena Maestro Vidwan late V.S. Anantha Rao, senior staff artiste of AIR, Hyderabad, belonging to the Vijayanagaram tradition of Andhra Pradesh.

She honed her skills under his able tutelage and blossomed into a mature artiste. With the blessings of her Gurus and dedicated practice, Vandana has developed a meticulous and traditional technique of Veena rendition. Closely resembling the vocal style, her mellifluous play has drawn wide acclaim in the field of music.

‘A Top’ Grade artiste of All India Radio and Doordarshan, she has many laurels to her credit. She is a regular Member of Sthree Taranga, a Musical ensemble exclusively by ladies led by Sukanya Ramgopal. Academically, she has a Diploma in Music. Alankar in Music and a Post-Graduate in Zoology.