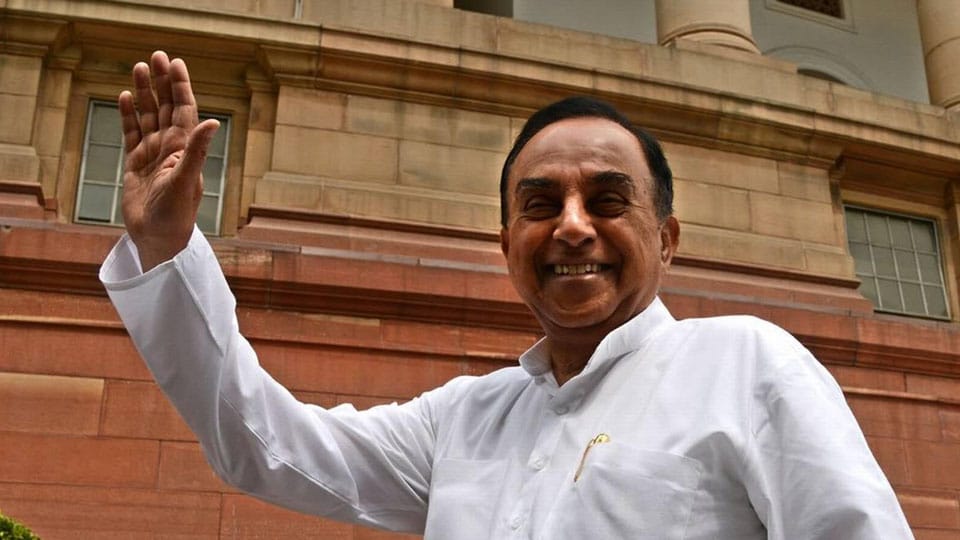 In a recent interview on a TV channel Dr. Subramanian Swamy, economist and BJP Member of Parliament, reiterated his opinion that this Government had no economic policy, does not know what it is up against and warned that the Indian economy would crash like 1930’s United States if cash is not put in the hands of consumers.

This reminded me of the ‘Spend Mantra’ of the US President George W. Bush after the September 11 terror attack. The US President, fearing that the economy, which was in decline since March of that year would further spiral down rapidly after 9/11, urged Americans to spend money. Bush said, “Get down to Disney World in Florida…Take your families and enjoy life, the way we want it to be enjoyed.” And people did.

According to ‘The New York Times,’ after this call by Bush, personal consumption expenditure increased significantly and by end of November of that year, 8 months after the recession had begun it had ended!

So may be Dr. Swamy is right when he says, “Many economies around the world are driven by consumers.”

He also made another suggestion, “Build 8-lane Highways from Delhi to Chennai, Delhi to Kolkata…build roads in villages so people can get work and get paid.” This reminded me of the ‘Work Projects Administration’ programme.

This programme was launched by the US Government during the depression to employ people, pay them and by that increase consumerism while also building infrastructure for the country.

Under this programme, millions of Americans were employed who went on to build thousands of schools, hospitals, bridges, storm drains, airfields and roads. This not only put money in people’s pockets but later helped America prosper. As the late President Kennedy acknowledged saying: “It is not wealth that built our roads but roads that built our wealth.”

So seems like Dr. Swamy is suggesting similar solutions. But will it work in COVID-19-2020 India? And who will undertake such a risky experiment? Well, why not Dr. Swamy? He seems willing and has been waiting…and waiting for a while now.

In January of this year at the 8th edition of “The New Indian Express’ ThinkEdu Conclave” in Chennai when he was asked why his party, the BJP, does not acknowledge that the economy is in a bad shape, Swamy said: “You said I am the best Finance Minister (FM) we never had. You tell Mr. Modi to try and experiment with me.”

Dr. Swamy has missed the FM’s position quite a few times. From the time of late PM Chandrasekhar to Vajpayee’s NDA Government to the present Modi Government, he keeps missing the chair. But Dr. Swamy being Swamy never gives up.

A year ago on May 22 Dr. Swamy tweeted, “If Modi wants 10 percent per year growth in GDP for next 5 years he should hand me the MoF (Ministry of Finance).”

Then a week later on May 29th he put out another dejected tweet, “May be instead of Chowkidar I should affix Mazdoor because I constructed a multi-storeyed building for the party by fighting all these cases but do not get a luxury apartment to live in it. Lord Krishna explained why to Arjuna after the war.” Well, he was probably alluding to the statement in the Bhagavad Gita where Krishna tells Arjuna, “You are not entitled to the fruits of your actions.”

Just earlier this month, speaking to journalist Betwa Sharma, Dr. Swamy said, “I’m the second most popular person in the party today after Modi — he just can’t keep me out, especially when I’m highly trained in economics. I need to be in the economic decision-making. For all my long sacrifice, fighting the Emergency, fighting corruption…There must be some sense of reward. I’m not saying that I should get whatever I want, but there should be some proportion to the contribution I’ve made.”

Dr. Swamy almost sounds like an over-achieving student in class, who when the teacher says she is going to pick a class monitor, keeps raising his hands shouting “pick me, pick me” but is constantly ignored, even though he is sitting in the front bench, right in front of the teacher, his hands right in her face. He knows he is deliberately being ignored but still continues to try hoping the teacher will feel bad and pick him.

So will the BJP and PM Modi pick him sooner or later? Highly improbable. For four reasons.

First — Litigator. Dr. Swamy was never accepted into BJP for his “economic” prowess, but for his litigiousness. He can litigate the hell out of anyone. He has done more for BJP in terms of bringing down the Congress and the corrupt than any other BJP member.

Second — Trust deficit. Dr. Swamy once said RSS is an anti-national organisation, the quicker it is disintegrated the better for India. Yes, RSS may have forgiven that remark, but we don’t think they have forgotten it. Oh! And then there is the memory of “Swamy’s tea party” that brought down the first NDA Government.

Third — Laundry service. Everyone fears people who wash dirty linen in public and Dr. Swamy is known to perform a full-on laundry service at the city square. The PM already got a sample when Dr. Swamy said, “He (Modi) doesn’t want me. He doesn’t want any Minister to talk back to him, let alone in public, but in private cabinet meetings too.”

Four — Ego occupancy is at full. Obviously, Dr. Swamy feels the PM has an ego problem. On the other we doubt if Dr. Swamy is open to other peoples’ opinions and suggestions either? Didn’t he declare that Nirmala Sitharaman, a qualified economist, “does not know economics?” Dr. Swamy should know there is room for only one person’s ego in the Government; and it’s taken. There is no room for a second.

That said many middle class Indians would like to see Dr. Swamy as FM. If not for anything else then at least to see if he can put his money where his mouth is. Especially his claim of, “If I am in the Government, I will do it within one week.” He was talking about abolishing Income Tax.

If doors to powerful offices have to open then one has to keep their mouth closed, and that is an impossibility for Dr. Swamy. That is why he may always be left waiting…his hands raised saying, “pick me, pick me…” but never to be.

P.S: If you still want to see Dr. Swamy as FM, you can start by signing a petition floated by a few people on ‘Change.org – Make Subramanian Swamy the Finance Minister of India.’ Interestingly for a man who boasts of having 9 million followers on twitter and being the second most popular leader after Modi in BJP, still two years after this petition was posted only 486 have signed it! There’s a reality check for people who feel powerful based on their social media followers. Oops!