Home » News » Food parcel service can continue but… exercise restraint if you can: DC 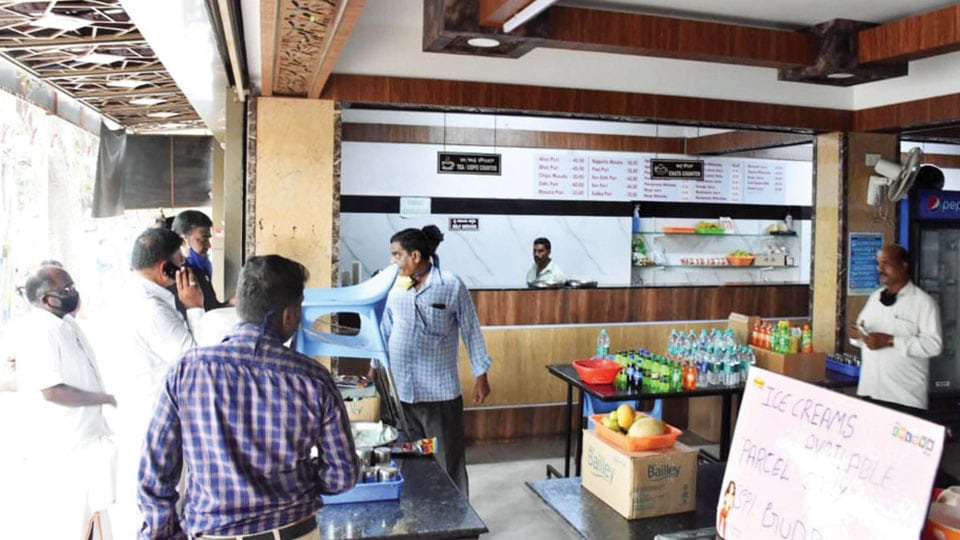 Food parcel service can continue but… exercise restraint if you can: DC

Mysore/Mysuru: Parcel services from hotels, restaurants, eateries and door-to-door delivery can continue even between May 29 and June 7 where the District Administration has imposed tighter curbs.

Meanwhile, Deputy Commissioner Rohini Sindhuri, speaking to Star of Mysore, said that while restaurant kitchens can function and parcel deliveries can continue, she requested the people to refrain from ordering food from outside just for a few days and if possible, cook at home itself as the aim of this tougher lockdown was to reduce movement of people and interaction which would inturn bring down the COVID positive cases. She further added saying that this was only a request to the public and the restaurant owners and not an order.

The DC also said that industries that are mandatory to operate will be allowed to function and the rest will be closed.

“This next week is critical to bring down the Total Positivity Rate which is hovering above 2,500 to 2,700 now. Ask yourself, if you have to compulsorily open then follow the State Government guidelines. If you can close for a week, please do so. I can only request,” the DC said.

The case load seems to show no signs of respite. “So, please stay indoors. Exercise restraint and follow self-regulation. There have been many calls from various sectors since morning as soon as the new lockdown measures have been announced. Only you have the responsibility of breaking the chain. Please understand this is only for a week to reduce the case load. Only very essential industries can function and the rest can close,” DC Rohini Sindhuri appealed.

The District COVID managers have also observed that many persons who are under home isolation are moving around spreading the disease to others and also if one member of a family is infected, the entire family is infected as no precautions are followed. Also, as soon as a person gets symptoms, they are ignored till the condition deteriorates. “Early detection, isolation and early medical care are the only solutions,” she said.

On the death rate in rural areas, the DC made an interesting observation. “K.R. Nagar was reporting over five to six deaths per day and when the reason was probed we came to know that many villagers sought the help of medical practitioners who did not follow the Government treatment protocols. Some were not registered medical practitioners. We closed down two to three such shops and warned the rest to strictly follow the Government treatment protocol. Now the death rate has drastically decreased,” Rohini Sindhuri explained.

Mysuru has over 40 to 41 percent positivity rate when compared to the State statistics. There are over 16,611 active cases in Mysuru as on today. “We are doing tests up to 5,000 per day and also doing symptomatic and targeted testing unlike mass testing that was done earlier. But the heartening factor here is that the death rate is low when compared to the State average. The State Case Fatality Rate (CFR) is 1.86 while Mysuru has a CFR of just 0.63. Mysuru is among the last four districts where the CFR is very low, the other districts being Davanagere, Chitradurga and Udupi. We are also highest in the State to meet vaccination targets,” she revealed.

In rural areas, micro-containment zones are being opened and this has yielded good results in T. Narasipur Taluk where the case load has considerably decreased. “We have adopted similar strategy in Hunsur too and this also will be beneficial in decreasing the case load,” Rohini Sindhuri added.