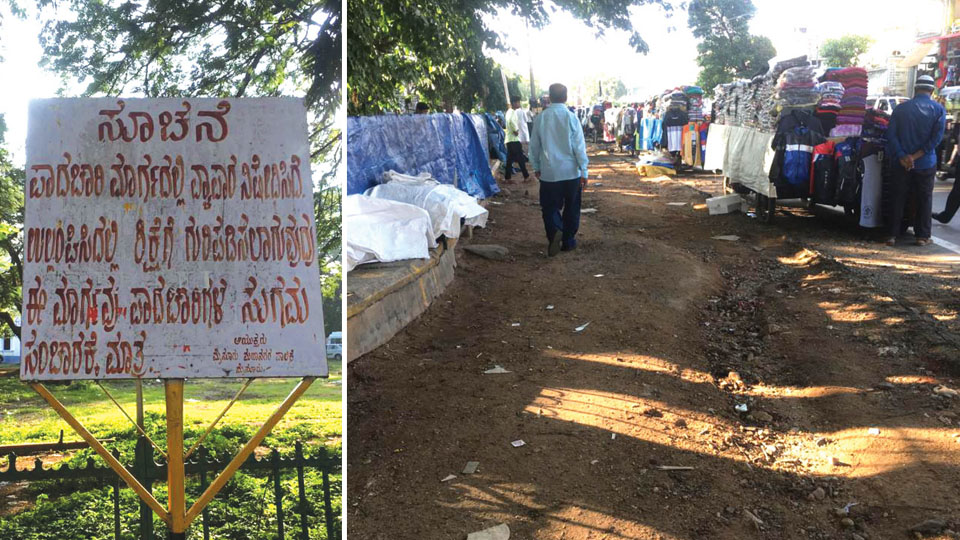 Mysuru:  Despite Mysuru City Corporation (MCC) officials warning vendors not to conduct business on footpath and the Traffic Police announcing imposition of fines if vehicles were found parked on footpaths and in No Parking zones, both the rules have been violated on the road leading to Gandhi Square from Town Hall in city.

Pedestrians who walk towards Gandhi Square from Town Hall, are forced to walk on the busy road as the footpath is occupied by vendors selling readymade clothes and cars and tempos parked on the footpath.

Though the MCC has installed a board warning vendors against conducting business on footpaths, vendors have occupied the footpath thus violating the warning and despite there is parking facility at the Town Hall, cars and tempos are seen parked on the roadside leaving no space for pedestrians.

As the MCC has not developed the footpath from the Town Hall to Gandhi Square, the vendors,  taking advantage of it are conducting their business. Even the trench dug up for drain is covered with mud and the footpath has become uneven which is also forcing the pedestrians to walk on the road.

Though parking facility for cars and bikes is provided around Gandhi Square, the number of people parking their vehicles haphazardly is more and as there is a maxi-cab stand at the circle, the pedestrian are the suffering lot as they risk their lives by walking on the road.

MCC Town Hall
Congress is the only party that empowers women: Eshwar Khandre
Hoteliers want Film City only in Mysuru