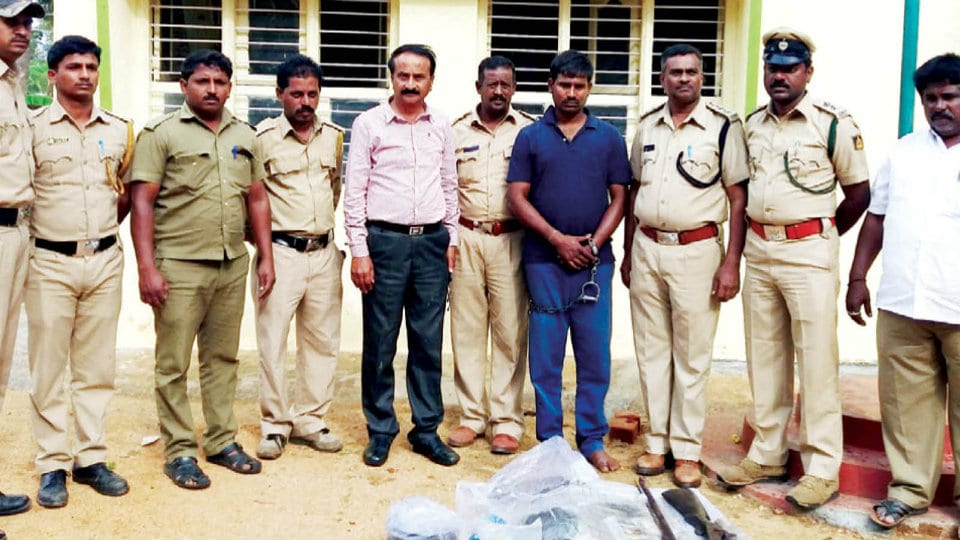 K.R. Pet: Forest sleuths arrested a person for hunting down a migratory bird at a lake located near K.R. Pet. The accused has been identified as Nagaraju, 35, a resident of Srikantanagar in Channarayapatna of Hassan district.

Nagaraju and his three friends Pradeep, Chethan and an engineering student, who are currently at large, had gone on a hunting spree on Aug.14 to Valageremenasa Doddakere in K.R. Pet and allegedly shot down a ‘Painted Stork’ using a country-made gun.

Later, Nagaraju uploaded the photograph of him holding the dead bird on various social media forms, which went viral.

People, who saw the photograph, criticised the Forest Department for not taking action. On learning about the incident, Nagamangala Assistant Conservator of Forest Anantharamu and his squad traced Nagaraju and arrested him on Aug.18. They also recovered the feathers and beak of the bird.

The accused confessed that he and his friends had killed the bird and consumed it.

Nagaraju was produced before the K.R. Pet JMFC Court, which remanded him to Judicial custody. The Forest sleuths are in search of other three accused.