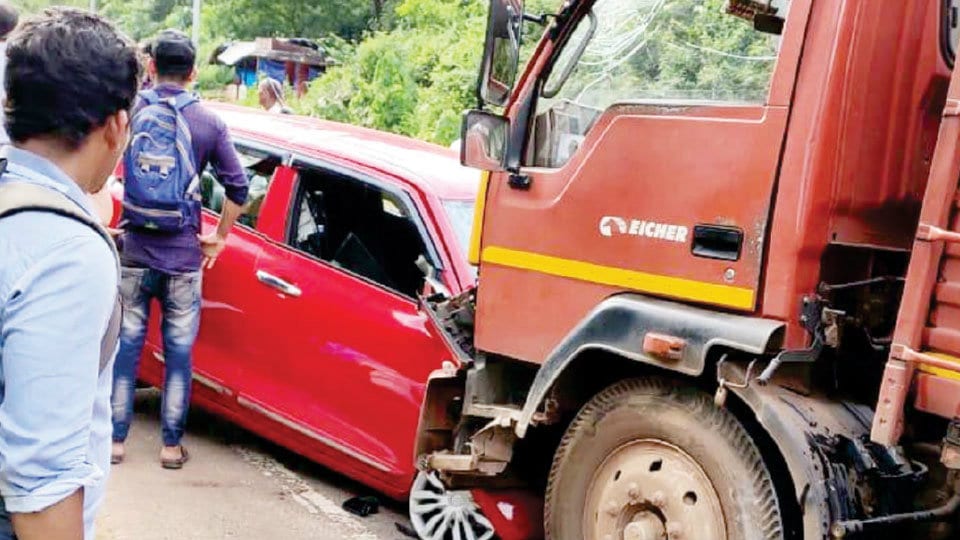 Madikeri:  Four members of a family died in a collision between a car and a truck at Adkar near Jalsoor in Sullia taluk (Puttur-Sullia National Highway) last evening.

Sullia Police gave the names of the deceased as Hachchaya Haji (80) and his three children — Ibrahim (55), Abdul Rehman (50) and Harris (45) — all hailing from Kottamudi near Napoklu in Kodagu district. Injured Umar Farooq was admitted to a hospital in Mangaluru. Police said that all the four persons died on the spot.

The Police said Hachchaya Haji and his family were returning to their village after meeting their relatives in Mangaluru. The Swift car they were travelling in was registered in the name of Abdul Rehman. At around 3 pm, the driver of the car reportedly overtook an auto at Mavinakatte near Adkar and hit the approaching truck. The truck was filled with oil and the impact of the accident was such that the front portion of the car was mangled.

Hachchaya Haji’s wife had passed away last year and all the other victims have families at Kottamudi. Soon after the accident, relatives came to the hospital and heart-rending scenes were witnessed. The bodies were shifted to Sullia Government Hospital and KVG Hospital in Sullia. Post-mortems were performed and the bodies were handed over to relatives.

Accident
What are the Best Mutual Funds to Invest in India?
Mobile shop burgled in city