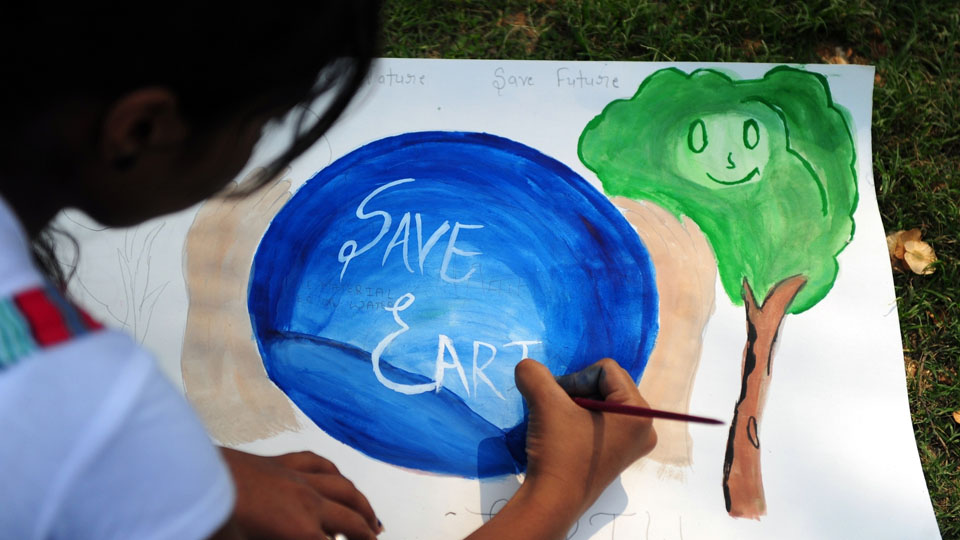 Fussing about future Passive about present

The World Environment Day has just been observed with the theme Beat the Plastic Menace for this year. Just as healthcare is perceived myopically in common circles as treating the sick flock with medicines, issues of environment protection seem to be limited to planting saplings, conveniently forgetting the role of earth’s life forms other than human beings. While taking to the broom as it were by both people at large and government staff to get rid of rotting residue in living spaces, clearing the lakes and rivers of debris dumped into them since October 2, 2014 under the Swachch Bharat Abhiyan witnessed participation on a national scale, the mass of residue seems to have outdone the Abhiyaan. Clarion calls for avoiding dumping plastic and other debris into water bodies and not to let sewage and industry effluents into rivers across the country, flashed in bold font regularly by dailies of all hues is yet to be bestowed positive response by the offending parties in the land.

Knowledgeable persons warning people about the grim future for them and the country by writing feature articles in simple language in the wake of plethora of destructive acts such as rampant denudation of forests, mindless mining of sand from river beds, gobbling fertile lands for construction of dwellings as well as laying multi-lane roads, unabated cluttering of roads with automobiles causing air pollution, indiscriminate use of chemical fertilisers and pesticides for short-term gains and so on are branded as doomsday agents, dismissing their opinions as fussing about future.

The idiom Forewarned is Forearmed has its loud message for the people preferring to remain passive about their ongoing environment threatening acts hurting not only their own life but the rest of the life forms. Even the elementary lesson taught in primary school stage about the critical role that lush greenery plays in sustaining the water cycle and normal rainfall during well-marked seasons round the year seems to have not alerted the government machinery on the danger of interfering in the time-honoured natural phenomenon. Regarding the rest of the species other than human beings, particularly marine fauna, river hosted aquatic creatures, birds, insects and denizens of the forest are being bandied about for their role in keeping a balanced biodiversity amounting to platitude for public consumption.

A new brand of experts, called in common parlance as environmentalists, have arrived on the national scene, including a band of them familiar to Mysureans. They are self-appointed brand ambassadors bestowing their attention to the cause of protecting environment, whatever is left of it. While their presentations are authoritative, their captive audiences are urbanites who shower accolades on the experts. The rest may feel that the pro-environment talks are just fussing about future even as the masses prefer to remain passive in both thought and deed concerning environment.