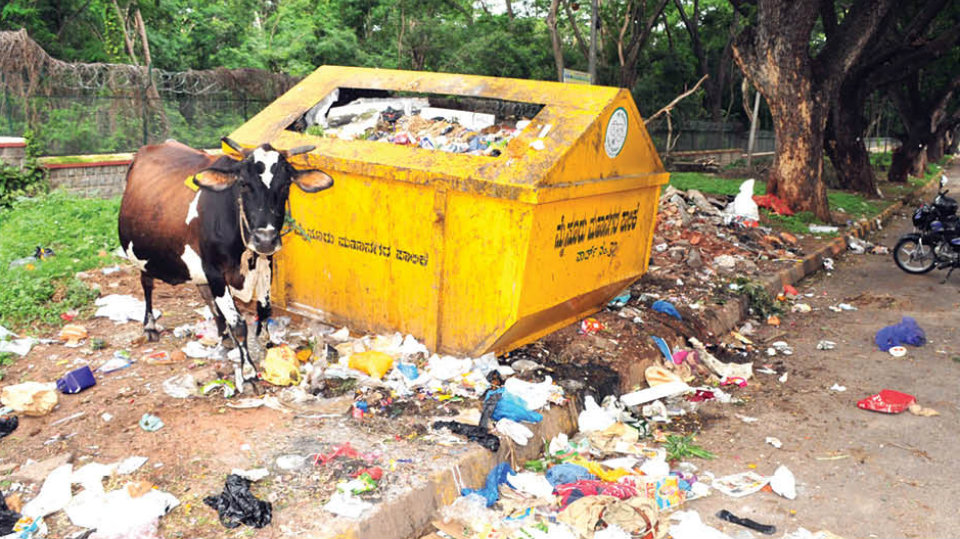 The advisory that is being flashed on the small screen namely recycle-reuse-refuse for the land’s people aimed at minimising, if not totally getting rid of the demonic plastic menace may have come too late, given the large number of users of the ubiquitous plastic bag showing no signs of responding to the call given by the top brass in the Government. Ironically, the feature of plastic products, first earning the ignominy as garbage after it has provided comfort of carrying every kind of consumables to the masses and next enduring in that state virtually for eternity seem to be pushing to the shade the arsenal of nuclear weaponry which was thought until not too long ago to be the most dangerous contribution of scientists. The saga of plastic in all its forms as products replacing the various traditionally used materials, particularly metals, including iron, copper and aluminium, welcomed with open arms in the industry due to cost-cutting feature prompts one to remark that garbage in plastic form acts as a strong link between happiness and disenchantment.

Mentors of society can only set the ground rules of the game of life so that its members don’t come to grief by flouting those rules, but don’t command the authority of enforcing their diktat. One such time-honoured rule, namely moderation in all acts, particularly use of life-supporting resources, seems to have got ignored by people at large in our times. If plastic products have been produced and used indiscriminately, why blame the invention by scientists?

Reports being regularly published in dailies informing citizens about their inputs in keeping open spaces in their  respective cities free from garbage are steadily but slowly yielding results in Mysuru, particularly in residential areas. Call it mob mentality, people at large, gathering at venues hosting various events such as celebration of festivals, cultural programmes, melas offering tasty dishes, attractive attires and so on, take their turn to transform themselves from revellers to garbage-generators. The quantity of garbage that the residents of the city and the floating population generate in a day, expressed as hundreds of tonnes is a wild estimate failing to regenerate consciousness in them to refrain from fouling up their living spaces and more so public areas.

School children of many towns in Karnataka are imbibing the habit of keeping their premises free from dirt for which the teacher fraternity deserve to be thanked. As for the city’s adult residents, civic administration may have to keep the tempo on roping in the householders on the task without relenting. If the city’s residents don’t reform themselves not to be garbage-generators, particularly in gatherings, why blame the civic body!