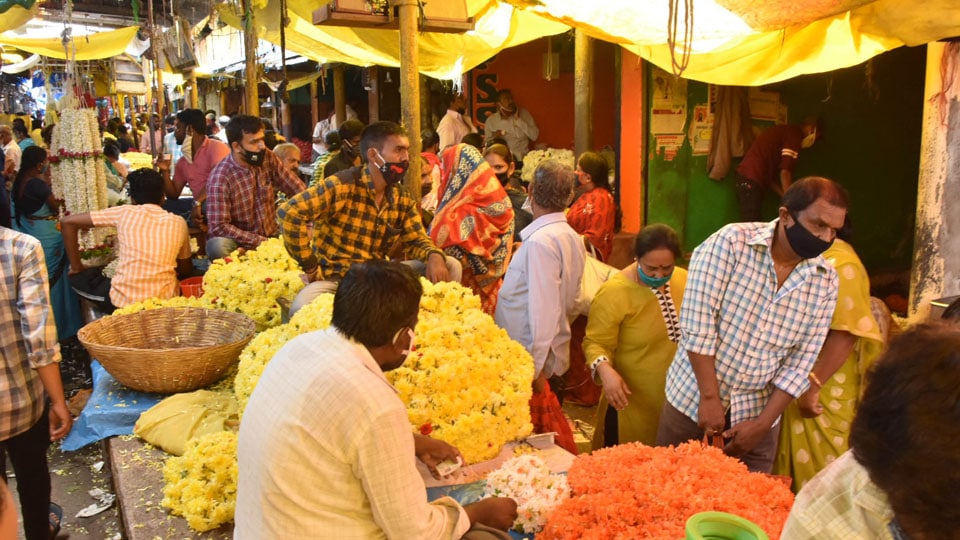 Gowri-Ganesha festival rush: Devaraja Flower Market to be shifted to J.K. Grounds from Aug.19 to 22

Mysore/Mysuru: In view of the heavy rush due to Gowri-Ganesha festival, the MCC has ordered closure of Flower Market in Devaraja Market for four days from Aug.19 to 22, as a crowd control measure.

However, for the benefit of sellers and shoppers, the flower market has been temporarily shifted to the spacious J.K. Grounds near the city Railway Station during these four days like it was shifted from July 29 to 31, on account of Varamahalaskhmi festival.

Deputy Commissioner Abhiram G. Sankar, in an order issued on Sunday, said that Chamundeshwari Hill temple will remain closed for devotees on Aug.19 due to Amavasya. Also, public transport vehicles and other private vehicles are banned to hilltop. Besides, preparation and distribution of Prasada to the devotees too has been banned.

The Jwalamukhi Tripurasundari Temple at Uttanahalli will  be shut for devotees on Aug.19 due to Amavasya and on Aug. 21 due to Gowri Festival.