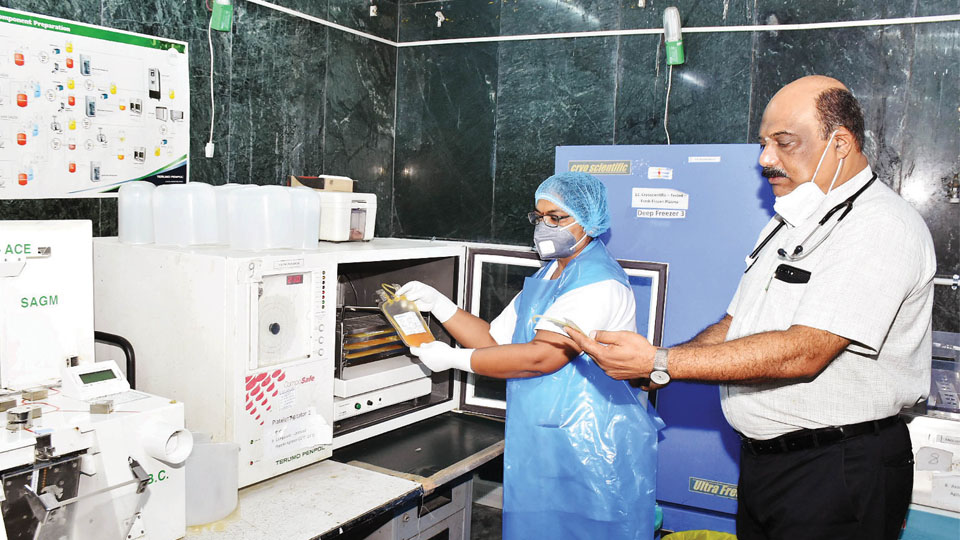 Plasma Donation Drive to be intensified

Plasma is the liquid portion of the blood that remains when all Red and  White Blood Cells and platelets have been removed. Convalescent plasma therapy is one of the many options being explored by doctors to treat COVID-19 and this involves using blood plasma from people who have recovered from COVID-19 and infusing it into patients who are currently undergoing treatment for the disease.

Accordingly, people who have completely recovered from COVID-19 and are asymptomatic for at least 14 days, are considered for plasma donation.

However, the plasma of children and the aged will not be collected and only people aged above 18 years and below 60 years are eligible for plasma  donation.

Pointing out that the key component of plasma for treating infections is antibodies, Abhiram Sankar said that plasma therapy involves transfer of antibodies from donors who have already mounted an immune response, thus offering immediate (but transient) protection to the recipient. As such, the recovered patients must come forward for donating plasma and thus save the lives of critically ill COVID-19 patients.

Noting that only 3 percent of COVID-19 positive cases are critical and treated with ventilator support, he said that many patients have reported improvement after receiving plasma from donors. Keeping this in mind, the COVID-19 recovered people should donate blood, he added.

Continuing, the DC said that as part of Rapid Antigen Test (RAT)  drive, the authorities will set up kiosks at all Hospitals for creating awareness on plasma donation by recovered people. The persons manning the kiosks will explain the benefits of plasma donation and encourage voluntary donation of plasma.

Also, this awareness will allay the fears in the minds of donors and educate them on the need for donating plasma to save lives of critically ill patients, he added.

According to the authorities, hardly 12  recovered people have donated plasma, including three MCC employees, three from the Police Department, one JK Tyre employee and five others. Each of the 12 volunteers have donated 180 ML of plasma, which has been despatched to private hospitals such as Narayana  Multi-Speciality, Shanthaveri Gopalagowda, Apollo BGS, JSS and Shivamogga Hospitals, upon receiving requisition for the same.

Speaking to Star of Mysore, Dr. B.S. Manjunath, in-charge of Blood Bank at K.R. Hospital, said that although many private hospitals in the city have requisitioned for plasma, K.R. Hospital and the designated COVID-19 Hospital on KRS Road are yet to place a request for plasma.

Pointing out that every donor is entitled to get Rs.5,000 as healthcare incentive under the Government’s Arogya Suraksha Scheme, he said that more than 6,000 COVID-19 patients have been discharged so far in the district and the lives of many other patients who are in a critical state can be saved if only five percent of them come forward and donate plasma. He further said that only the kith and kin of COVID-19 patients authorised by the Hospital can collect plasma.

Stating that Private Hospitals are charged Rs. 800 for every sample of blood sent for ELISA Test, he said the charges for the same in respect of Government Hospitals is Rs.200.

K.R. Hospital Blood Bank, which comes under MMC&RI, is the only Blood Bank in Mysuru Region (Indian Council for Medical Research-approved Clinical Trial Site No.31) for donating convalescent plasma, he said and added that the MMC&RI has reached an understanding with Mandya Institute of Medical Sciences (MIMS) for conduct of Plasmapheresis,  a process in which the liquid part of the blood  or plasma, is separated from the blood cells.

Study on outcome of plasma therapy

Pointing out that so far, 12 persons, including COVID-19 warriors who had recovered from the contagion, had donated their plasma following an appeal, he said that four critically ill patients had undergone plasma therapy — three in Mysuru and one in Shivamogga — and they are learnt to have shown improvement in their condition.

Stating that they have been informed that the patients after being transfused with plasma of  COVID-19 recovered people are showing signs of recovery, he said that however, the degree and extent of recovery may vary from patient to patient and the same is being documented to check its benefit on the patients.

MMC&RI is keeping a track on three patients from Mysuru who received plasma from K.R. Hospital Blood Bank and are undergoing treatment at three different private hospitals, he added.