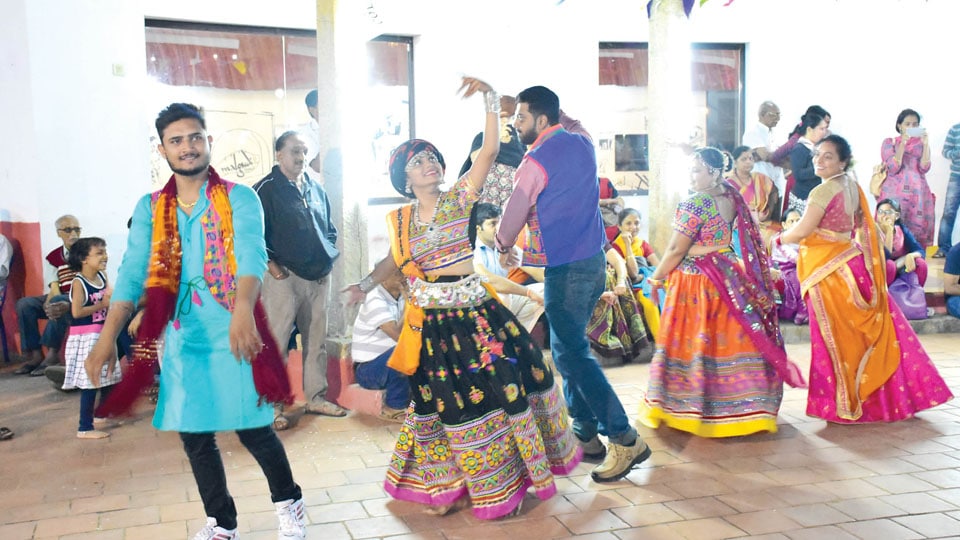 Mysore/Mysuru: The artisans, who have come for the ongoing Gujarat Utsav at JSS Urban Haat organised in association with INDEXT-C, a Government of Gujarat organisation, will be presenting traditional Gujarati dance ‘Garba’ tomorrow (July 21) between 6.30 pm and 9 pm.

D.M. Shukla, Executive Director and R.R. Jadav, Manager, INDEXT-C, have made an appeal to craft-loving people of Mysuru to visit the event and motivate the artisans by purchasing their artefacts, which will provide much-needed livelihood to the artisans. And also enjoy the Garba Evening on July 21. Over 50 artistes will be performing for ten different tunes.

The major difference between the two dance forms is that Garba is performed in circular movements with hands and feet, while Dandiya is played with colourful sticks.

Another perspective on the symbolic form of Garba is that as the dancers move around in circles making circular movements with their hands and feet, it represents the circle of life, which moves from life to death to rebirth, leaving only Goddess Durga unmoved, unchanged and invincible.

While the dancers perform in colourful costumes to the rhythm of a dhol or a drum, the men and women look vibrant and full of life in their attires. Women wear Chaniya Choli, a traditional Gujarat dress with three piece outfit and men who perform wear Kediyu, a short round kurta along with Kafni pyjamas along with Pagdi on their head. The modern day Garba is actually a fusion of Dandiya Raas and Garba. The dance is famous not only in India but also in US, UK and Canada.