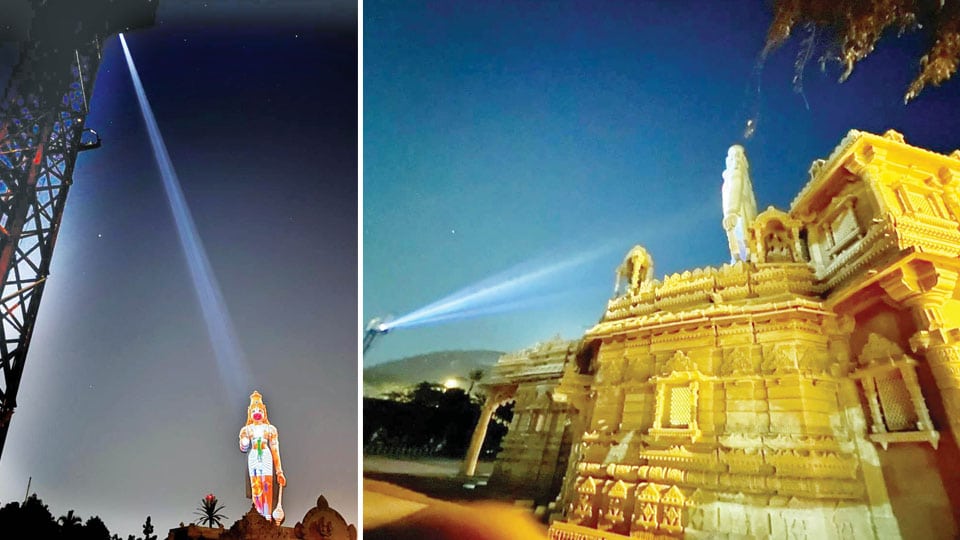 Among the many Ashrams in this deeply religious country, Sri Ganapathy Sachchidananda Ashram on Nanjangud Road in our city is indeed unique. It is mundane and at the same time metaphysical. Its spiritual realm is global with so many branches rendering service to the seekers of spiritual path in life. As is the tradition, this Ashram too is named after its founder and the spiritual head Sri Ganapathy Sachchidananda Swamiji who will be 80 on May 26, 2022.

The Ashram is unique because it embraces within its vast area many iconic features and facilities focussed to serve mankind and even animal world. There is a Vedic School, Ayurvedic Hospital, Music Therapy, Bonsai Garden, a Sanctuary for Parrots of many varieties, a huge unique kind of an auditorium with a capacity of about 3,000, a temple of Sri Venkataramana Swamy and Sri Dattatreya, the main deity of the Ashram, and may  be some more.

However, to this list of temples was added one more of the great epic Ramayana’s Hanuman, considered the most devoted Bhakta of Sri Rama. It happened due to the Sankalpam of His Holiness Sri Ganapathy Sachchidananda Swamiji. It is a grand edifice dedicated to Hanuman and one of its kind in this part of the world, according to Ashram sources. It is said to be the  culmination of millions of recitation of Ramayana, the Hanuman Chalisa, by devotees across the globe since many decades.

It started in the year 1999 when the Bayalu Anjaneya Swamy was consecrated in the premises of Sri Datta Venkateshwara temple within the Ashram campus. Later in 2012, the 45 feet gigantic statue of Karya Siddhi Anjaneya Swamy, made of monolithic rock from Pulivendula, Kadapa, Andhra Pradesh, was consecrated atop the temple-pedestal. The occasion was Swamiji’s 70th birthday.

Now the total height, including the temple-pedestal, is 70 feet. Of course, there is another beautiful statue in the main sanctum consecrated for devotees to worship. Here too there is a surprise — Patala Anjaneya down below, inside the temple, with steep steps to enter the cave.

It is called Panchamukhi Anjaneya — representing, may be, the five elements of this planet — earth, air, fire, water and ether.

However, the most unique and memorable part of one’s visit to this temple could be the Hanuman Chalisa Sound and Light Show by digital mapping — like laser show, but most magnificent, never seen anywhere kind. A sort of ‘seeing is believing’ show.

It may be recalled, former Deputy Prime Minister L.K. Advani had inaugurated the 3D Mapping projection on the 45-feet tall Karya Siddhi Hanuman statue at the Ashram on Dec. 1, 2017.

The design of this Show was approved by Swamiji in 2018 but made operational recently in 2021 after the pedestal-temple was redone in yellow-red stone sourced from Jaisalmer mines of Rajasthan. The wooden carving came from Gujarat. This marvel of a modest-sized temple has paintings depicting the Hanuman’s story in the form of murals on the walls and ceilings by artisans. The subject of the murals are about three planes of Hanuman’s prowess — 1. Gagana Hanuman, crossing the ocean to Lanka and bringing the Sanjeevani mountain. 2. Dharani Anjaneya, vanquishing several demons and tracing Sita Devi at Ashoka Vana. 3. Patala Hanuman, slaying Ahi Raavana in the nether world, in the form of Panchamukhi Hanuman.

However, the greatest and mirth giving part of the visit to the temple would be the Sound and Light Show. The class and the grandeur of the show is credited to its creator Mani Shankar of Hyderabad, the renowned Bollywood director and acclaimed multimedia project director.

He conceptualised the show in consultation with the Swamiji and developed the Hanuman Chalisa projections, mapping it on the giant Hanuman statue itself. It tells the story of Hanuman Chalisa of Sant Tulsidas who wrote the revered Ram Charita Manas. The show has amazing motion graphics and animation in multicolour beginning with the virtual abhisheka; what follows is an explosion of colours, texture and sound. Indeed, a mind-altering eight-minute show, a feast to the eyes and ears of the viewers. Awe-inspiring visual experience. A sight for the Gods, now mortals can see!

The 45-feet Hanuman statue suddenly becomes animated and the audience becomes immersed in the colour projection. One cannot take the eyes off from the statue for those mesmerising eight minutes.

Some photos of the images of the show are produced here. Worth spending an evening at the temple if one has time, interest in entertainment and, of course, spiritual inclination. Show is on.