Home » Feature Articles » Heavenly Visitor ‘Swan’ at its best in May 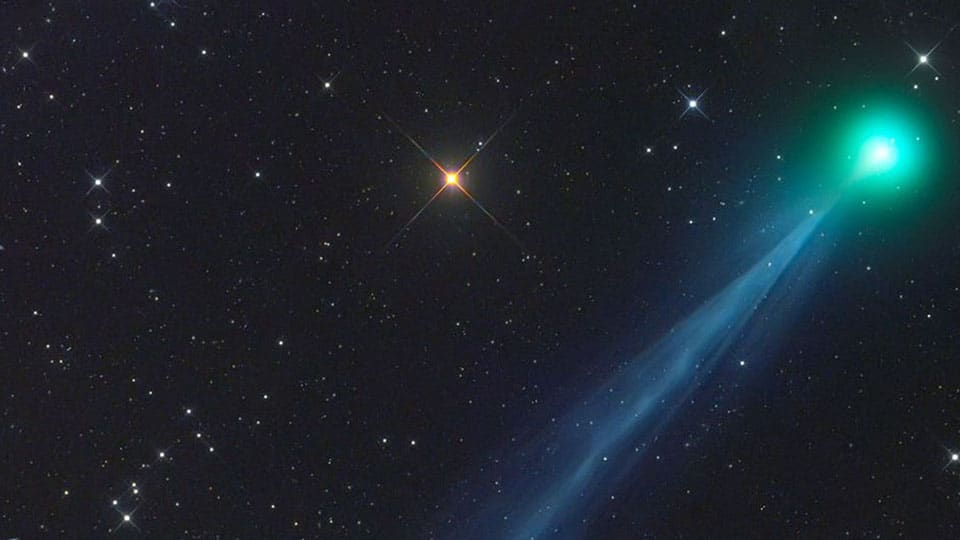 Heavenly Visitor ‘Swan’ at its best in May

The most beautiful and unpredictable celestial object perceptible in the night or morning sky is the ‘Comet’. Most of the time, Comets remain in deep-frozen “sleep” in outer space, but occasionally they are dislodged from their orbits and fall forward the inner Solar System. Comets are at their brightest when they are closest to the Sun, it is best to search for them in the sky directly after sunset although never when the Sun is still above the horizon.

In the month of May this year, fix your stares on the sky to watch the spasmodic Comet ‘SWAN’. Throughout May, it will be visible in the Northern Hemisphere.

The behaviour of the Comets is highly unpredictable. Comets large enough to be detected in the outer Solar System may prove to have thick, insulating crusts that they never develop, whereas smaller Comets may be as insubstantial as a snowball and melt away to fragments as they come closer to the Sun. We can expect a ghostly green blob to grow brighter in the sky near ‘Pisces’ in the coming days, as Comet C/2020 F8 SWAN made its closest approach to Earth. This Comet made its closest approach to Earth on May 12 and will reach Perihelion (Closest approach to Sun) on May 27, flying by just 55 to 90 million kilometers (0.6 Astronomical Units) from our planet.

C/2020 F8 SWAN is a comet which was discovered in the images taken by the Solar Wind Anisotropies (SWAN) camera on March 25, 2020, abroad the Solar Heliospheric Observer (SOHO) spacecraft. This Comet is certainly the comet of the moment, with reports abounding that its tail is about 16 million kilometers and shall be absolutely wonderful and bright naked eye in the coming days.

Comets are the least predictable members of the Solar System. A ‘Comet’ is a ball of ice and dust that orbits Sun. Presently, ‘SWAN’ can be seen in ‘Pisces’ constellation at a visual magnitude of 4 to 4.5 and has been getting brighter and larger since March 2020. On May 20, the magnitude may be 3. Note that, lower the value of magnitude, greater the brightness of the object. Although this Comet was very low in February 2020, it moved rapidly and can be located moderately high in the eastern horizon.

READ ALSO  Sporadic Conjunction of Mars and Venus with Moon on July 12, 13

Since comet ‘SWAN’ is generally referred to as a ‘Morning Comet’, it can be usually seen at around 5 am. Even with the help of small telescopes and binoculars, the Comet is noticeable. The Comet is visible from all parts of India. The various astronomical devices used to witness this particular comet are Celstron Nexstar11 telescope, Meade F3.3 focal reducer, and Stellacam II video camera and Canon 6D, 200 mm Lens f6.3, SO 800.

During the first two weeks of June also, Comet may be clearly visible. The reflecting telescope with 6-inch reflector will do to witness this Comet. For the next chance to see this comet, we may have to wait till 2061. So enjoy watching ‘SWAN’ and reveal the magnificence of Astronomy.