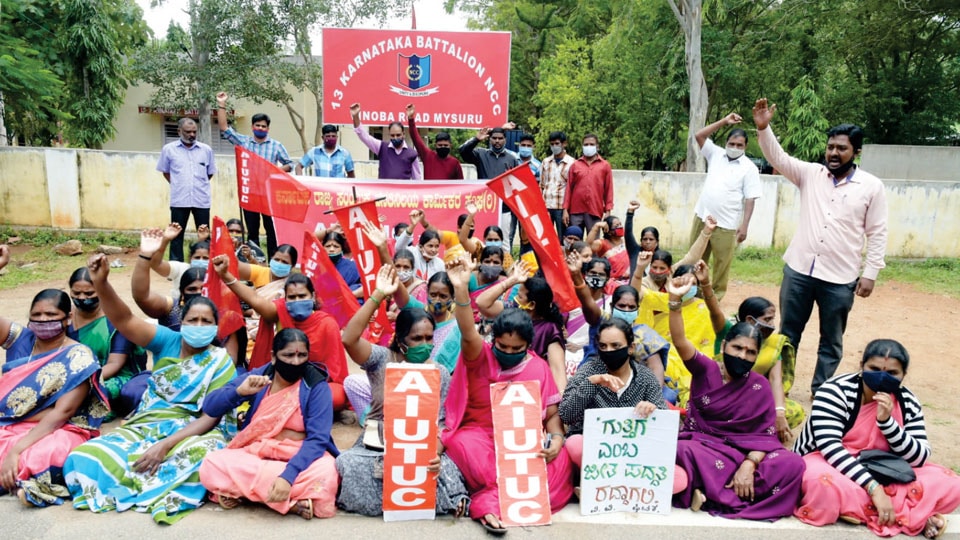 Mysore/Mysuru: Staff working in various hostels staged a protest here yesterday demanding the salary for lockdown period. The protest was held under the aegis of All India Trade Union Congress and Karnataka Rajya Samyuktha Vasathi Nilaya Karmikara Sangha near the DC’s office here.

They said that the outsourced employees have joined the hostels in June but have remained without work due to non-starting of schools and colleges. They have not been paid in the last three months. The State Government has released the salary for the mid-day meal staff pending since June and even they too should be given the salary for that period. They will launch ‘Bengaluru Chalo’ agitation on Sept. 25 in case their demands were not met.

They said  as many as 30,000 persons are working on contract basis for the last 17 years as cooks, assistant cooks and security guards in hostels due to non-filling of Group D posts. Since imposition of lockdown in March-April, they have not been paid. Their families have come to streets for want of money. Despite standing instruction from the Government to pay the salary of lockdown period, it has not been followed in many districts, they noted.