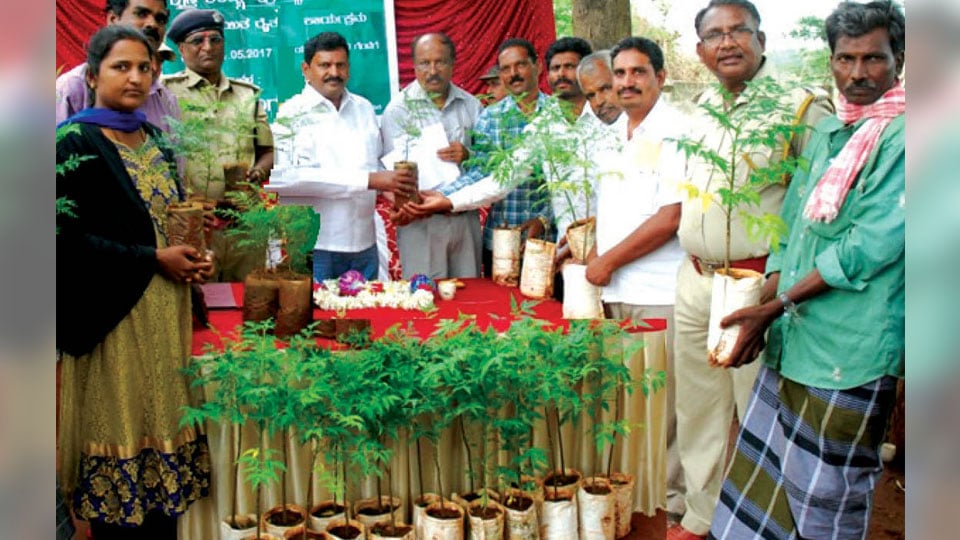 Hunsur: Emphasising on the need for planting trees in order to maintain ecological balance, Hunsur MLA H.P. Manjunath said that the Forest Department was ready to extend all support in this regard.

He was speaking at the sapling distribution programme organised by the Agriculture Department under the Agri-forestry promotion programme at Hunsur Town’s Central Nursery recently.

Pointing out that the global climate change has been severely affecting the lives of people, the MLA called upon the people to make best use of various schemes of the Forest Department for the expansion of green cover.

Range Forest Officer Shanthakumaraswamy said that Hunsur Forest Range had distributed 4.10 lakh saplings (2017-18) to 1,200 select farmers under the Agri-forestry promotion programme. These saplings were planted in a total 1,000 acres belonging to farmers, he pointed out.

Giving a brief on last year’s statistics, he said that 4.30 lakh tree saplings were distributed to 817 beneficiaries and a total Rs. 28.8 lakh had been credit to the bank accounts of farmers who had successfully taken care of the saplings. Stating that the Department was distributing saplings to farmers at subsidised rates, he called upon the farming community to make the most of Government schemes.