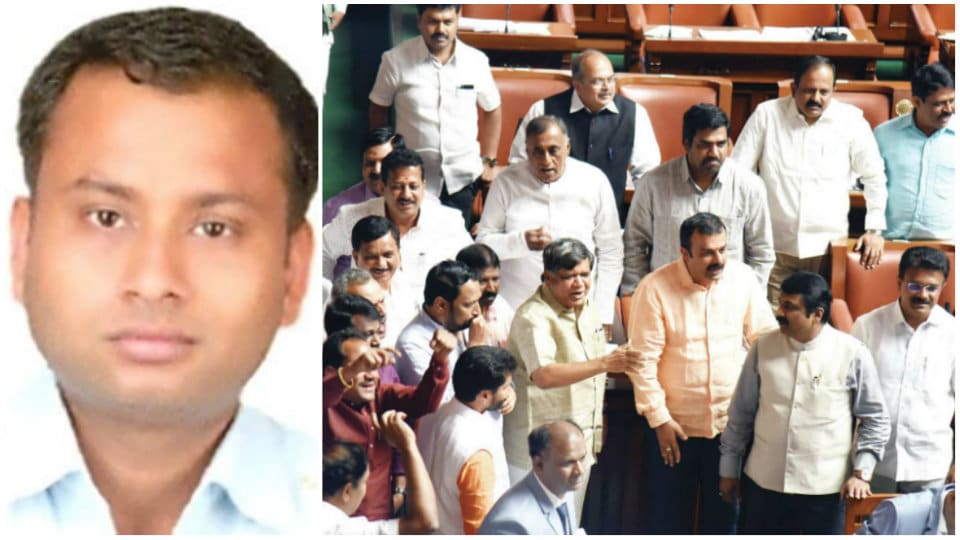 Bengaluru: The BJP staged a dharna in the Assembly yesterday demanding that the Government clear the doubts raised by IAS officer Anurag Tiwari’s family regarding his mysterious death.

As soon as the Session began, the Opposition Leader Jagadish Shettar and a few others raised the issue and demanded that the death of Tiwari be allowed to  be discussed under Rule 69.

If it comes to light that someone is behind his death, then stringent action will be taken against such persons. However, right now the report states that Tiwari had died due to heart attack, said Jayachandra.

He questioned the Opposition how under Rule 69 it could be taken up for debate.Moreover, is there a bigger investigation agency than the CBI, he asked.

However, the Opposition demanded that the issue had to be debated as there were several doubts related to his death.

There are talks doing the rounds that he was killed because he was trying to unearth scam in the Food Department and putting a stop to it.

In the light of these doubts, the investigation should be carried out, they said. But when Council Chairman K.B. Koliwad did not allow for discussion under Rule 69, the BJP members protested and entered the Well of the House. They started shouting loudly demanding for a discussion on the subject. This led to war of words between the ruling party members and the Opposition.

At this stage, when Koliwad allowed them to discuss, the members returned to their seats. Shettar said that there are lots of doubts regarding the mysterious death of Anurag Tiwari. When his relatives came to discuss with the Chief Minister, he ignored them, charged Shettar.

The CM should invite the family members immediately and listen to them as they have lots of issues and doubts regarding his death. If this is not done, there will be a feeling that the Government is trying to hide something, he complained.

Koliwad on listening to the demands of the Opposition assured them that he would get the Chief Minister to respond appropriately at the right time.