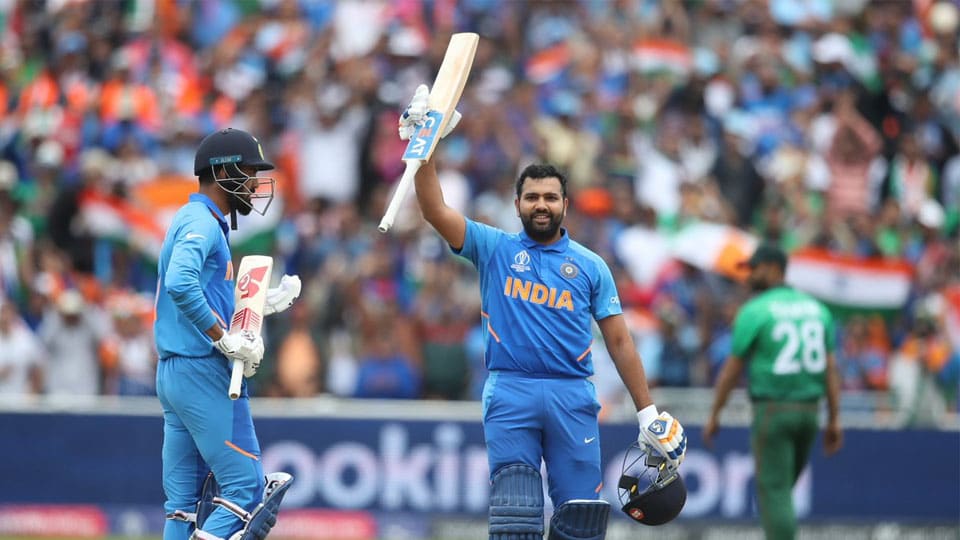 India entered the semi-finals in the World Cup 2019, with a spectacular 28-run win over a fighting Bangladesh team with excellent performance by Rohit Sharma who scored a century and brilliant death bowling by Jasprit Bumrah at Edgbaston on Thursday.

Bangladesh became the fifth team to be eliminated from this edition of the World Cup, but they can go out with their heads high as they fought till the last.

India off to great start

Indian openers Rohit Sharma 104 (92b, 7×4, 5×6) and K.L. Rahul 77 (92b, 6×4, 1×6) were in awesome touch and batted with ease and negotiated the Bangladesh attack well to give their team an excellent start by adding 180-runs for the opening wicket which enabled India to put up a decent par score batting first. The partnership was the highest opening wicket partnership for India in World Cups.

Bangladesh, needing 315 to win, started well with openers Tamim Iqbal (22, 31b, 3×4) and Soumya Sarkar 33 (38b, 4×4) adding 39-runs for the opening wicket. Tamim Iqbal departed bowled by Shami and India got the needed break-through.

Shakib Al Hasan, Bangladesh’s leading run-getter in this World Cup, batted well to score a valuable 66 (74b, 6×4) and added 35-runs for the second wicket with Soumya Sarkar and further added 47-runs for the third wicket with Musfiqur Rahim 24 (23b, 3×4).

Bangladesh lost Soumya Sarkar and Rahim quickly and were reduced to 121 for three in 22.6 overs. Liton Das (22, 24b, 1×6), Mosaddek Hossain (3) and Shakib Al Hasan (66) were removed by Hardik Pandya and Yuzvendra Chahal respectively and Bangladesh were reduced to 179 for six in 33.5 overs.

The tail of Bangladesh did not wag much and Bangladesh were bowled out for 286 in 48 overs. India won by a margin of 28-runs. Jasprit Bumrah (four for 55) was well supported by Hardik Pandya who took three for 60.

Australia leads the points table with 14 points, followed by India with 13 points. New Zealand is in the third place with 11 points and hosts England is in the fourth place with 10 points. Bangladesh have 7 points from eight games. Rohit Sharma was chosen as ‘Player of the Match.’