Home » News » ‘India that is Bharat: Coloniality, Civilisation, Constitution’: Book release and discussion with author in city on Nov. 27 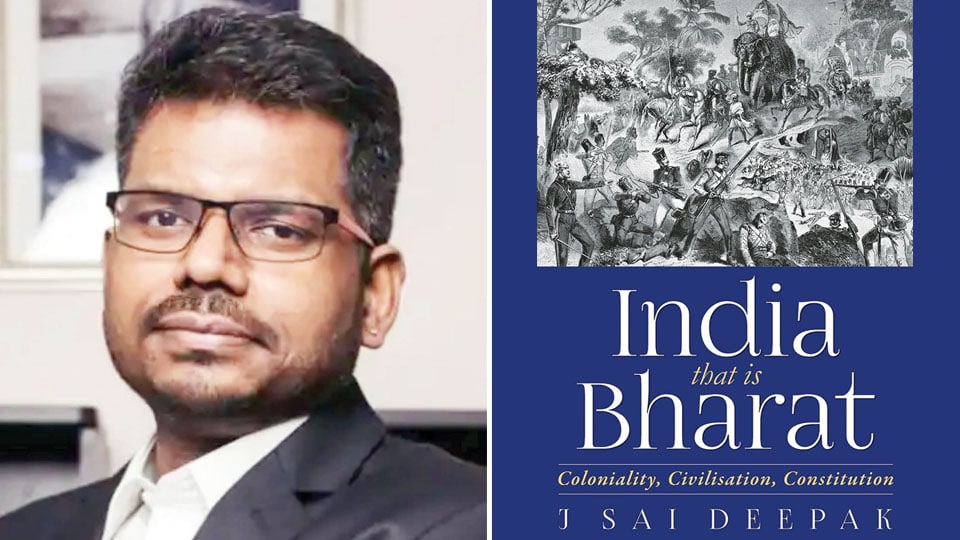 ‘India that is Bharat: Coloniality, Civilisation, Constitution’: Book release and discussion with author in city on Nov. 27

Mysore/Mysuru: The book ‘India that is Bharat: Coloniality, Civilisation, Constitution,’ authored by Supreme Court (SC) Advocate J. Sai Deepak, will be released by titular head of Mysore Royal Family Yaduveer Krishnadatta Chamaraja Wadiyar at a programme organised by Manthana Mysuru at Vijnana Bhavan in Manasagangothri on Nov. 27 at 5 pm.

A discussion with the author will follow the book launch. Admission for invitees only. Entry from Kukkarahalli Lake Gate.

J. Sai Deepak is an Engineer-turned-Law Firm Partner-turned-Arguing Counsel. Sai has a Bachelor’s degree in Mechanical Engineering from Anna University (2002-06) and a Bachelor’s Degree in Law from IIT Kharagpur (2006-09). Sai has been a Litigator since July 2009 and was an Associate Partner at a leading National Capital Region-based litigation firm, Saikrishna & Associates, until he went independent in June 2016.

In June 2016, Sai founded Law Chambers of J. Sai Deepak and set up practice as an Arguing Counsel. He is engaged by law firms and individual solicitors to appear on behalf of their clients before the Supreme Court of India, the Delhi High Court, the Madras High Court, the Competition Commission of India, NCLAT (National Company Law Appellate Tribunal) and the Intellectual Property Appellate Board.

In close to twelve years of practice, Sai has carved a niche for himself in Civil Commercial litigation, IP litigation, Constitutional law and Competition law.

Few of his landmark cases include: In May 2017, Sai was part of a landmark decision of the Delhi High Court in Sanjeet Kaila Vs Union of India & Anr., which recognised the right of members of Indian Armed Forces to supply of safe equipment as part of their right to life under the Constitution.

In July 2018, Sai’s arguments on behalf of the #ReadytoWait women campaigners in the Sabarimala Ayyappa Temple Petition before a Constitution Bench of the Supreme Court were widely reported by the national media.

In July 2020, Sai represented the Chief Tantri of the Sri Padmanabhaswamy Temple and Indic organisations in a landmark decision wherein the Supreme Court interpreted the 26th Amendment to the Constitution to uphold the rights of the Travancore Royal Family in relation to the Temple.

Since November 2016, Sai has been engaged by the Department of Industrial Policy and Promotion, Ministry of Commerce, Government of India, as an Honorary Advisor on the implementation of the National IPR Policy.

It may be mentioned, Star of Mysore had published a Book Talk titled “A path-breaking research work — India that is Bharat: Coloniality, Civilisation, Constitution” by R. Chandra Prakash, former President of Mysore Grahakara Parishat (MGP) on Oct. 30, 2021.