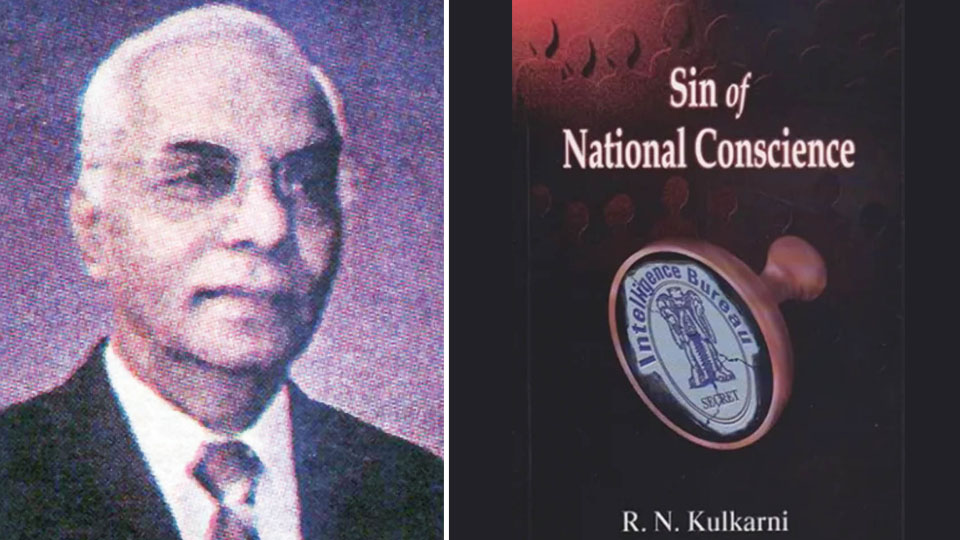 Not surprisingly, in the last and the 12th chapter of the book, rather appropriately titled A cry in the wilderness, Mr. Kulkarni bemoans his plight with the  ‘holy cow IB’ for 35 years and reproduces some letters he has written to the Prime Minister and the Home Minister in this regard.

And also another letter written to the IB Director in 1998, just before his retirement.  He concludes his letter with a moral statement, Dharmo Rakshati Rakshitaha.

The book, which carries a prologue, also has an epilogue, which speaks of the Karma of the author and his final liberation from the worldly bonds. Suddenly you find

Mr. Kulkarni having loaded 441 pages with matters mundane and material, turning metaphysical and spiritual. Having given vent to his feelings to the extent he could, he seems to heave a sigh of relief, unburdening himself of the “Sin of National Conscience.” He forgives everyone he has discussed in the book, saying he neither nourished malice nor ill-will towards the political tribe or the Police, almost like Jesus Christ, who said on the Cross: “God, forgive them, for they know not what they do.”

Here we are reproducing an Abracadabra titled “Intelligence Bureau: Kulkarni’s complaint” published in two parts in Star of Mysore dated 2nd June 2004 and 3rd June 2004 after his book “Sin of National Conscience” was released on 27th May 2004 at the Rotary Mysore. However, we are republishing the first part only. — Ed

The above quote from the Bible is inscribed on the plaque at the entrance to the Federal Bureau of Investigation (FBI) of America. That is its motto and I suppose rightly so for the simple reason, it is an agency of the US Department of Justice that investigates violations of federal laws that are not specifically assigned to other agencies, being particularly concerned with internal security.

How I wish our country too had an institution like this. Forget CBI.

In contrast, America has that dreaded Central Intelligence Agency (CIA), which is actively intervening in the affairs of other countries overseas in a covert manner. Its role during the cold war period in spying on USSR and its efforts in undermining the Communists and the Left Wing regimes all over the world is well-known.

In India, we have CBI playing a role similar to the FBI while RAW (Research and Analysis Wing) is engaged  in a role similar to the CIA. The only critical difference between the American agencies and the Indian is that our CBI and RAW are incompetent, unprofessional and emasculated by political interference. In between, we have also the Intelligence Bureau (IB).

The title of the book is Sin of National Conscience. A tricky headline, just like the tricks the IB people play in the course of their work. Probably, the title wants to proclaim that it is a sin to have a national conscience.

However, this confusion about the title is fortunately cleared because of an illustration of a seal carrying prominently the name Intelligence Bureau (see picture above).

Be that as it may, the author has made his intention clear in writing this book when he says in the Author’s Note that “The purpose of this book is to reach out to the people of India and it is intended to trigger a process of debate and reformation for the good of the country.”

Well, if this is the intention of Mr. Kulkarni in his nearly four years of labour writing this book, then it is certainly not a sin to have a national conscience.

Mr. Kulkarni believes the people of this country, including the educated ones, are totally ignorant of what he calls the “holy cow Intelligence Bureau.” I appreciate his pious hope that after the educated among our law-makers, if not the people of India, read this book, “the future of IB may be addressed rationally”  and the trishanku swarga status of IB in the eyes of the law may be corrected in the form of a Parliamentary legislation, giving IB a new independent status and legitimacy like CBI or the RAW.

As we, the people of India, do not know and as Mr. Kulkarni and all the employees and operatives of IB know, the IB, as of now, is the creature of an executive order of the British rulers going back to over 100 years.

Surprisingly, even after independence, the Indian law-makers simply carried on with the IB as it was constituted by the British and the fact that it was not constituted under any Act of Parliament remained.

As a result, the IB, which is considered the eyes and ears of Central Government, has no defined character. Nobody knows its official status even to this day — whether it is a Civil  Service, Police Service, Armed Police, Military or Paramilitary Service. According to Mr. Kulkarni, the confusion is such, the civilians carry Police baggage and vice-versa. He gives a number of actual work examples to prove this point.

His main grouse seems to be that the Indian Police Service (IPS) has effectively appropriated the organisation at the expense of IB’s civil employees and more importantly, at the expense of the very purpose for which IB is created — collection of true intelligence.

Actually, the IPS officers are both interlopers and usurpers of IB. The author explains at length, why.

The book is a product of Mr. Kulkarni’s hurt feelings. At least that was the feeling I got while reading through the book. It is also an expression of his concern for the nation’s security under IB. It reflects the genuine sentiments of IB employees, says Mr. Kulkarni and I suppose, it serves as a book of caution and guidance for the present and future civil IB employees too.

The book is also an alarm for our new law-makers that the country can no longer have a hotchpotch institution or a loosely organised Intelligence Bureau. As a result of the many organisational and operational deficiencies of IB, the country has suffered in the past many intelligence failures.

Mr. Kulkarni gives the re-cent example of intrusion of Pakistani soldiers in the guise of Mujaheedin in the Kargil sector, the hijacking of Indian Airlines flight IC 814 from Kathmandu and the Godhra carnage in Feb. 2002, as high profile intelligence failures on the part of the IB.

The book, “Sin of National Conscience,” is well-produced.

2 COMMENTS ON THIS POST To “Intelligence Bureau: Kulkarni’s complaint”