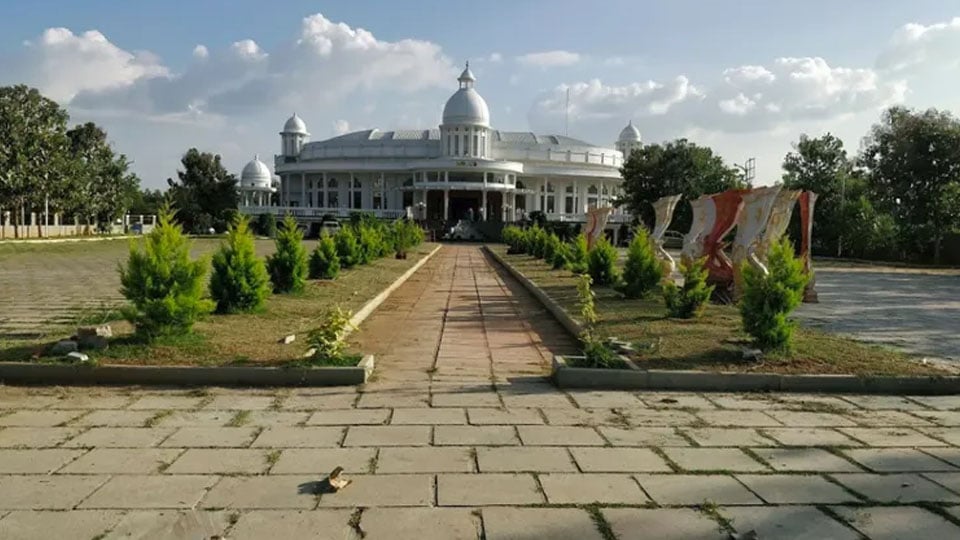 ‘Choultry stands on a residential area, nearby MUDA sites encroached’

Mysore/Mysuru: RTI activist N. Gangaraju, based on whose complaint former Deputy Commissioner Rohini Sindhuri initiated investigations into land mafia, has demanded Regional Commissioner (RC) Dr. G.C. Prakash to conduct a detailed probe into the disputed lands in all survey numbers including that of the land at Dattagalli where MLA S.R. Mahesh has built Sa.Ra Convention Hall.

Meeting the RC at his office yesterday, Gangaraju submitted a copy of RTC of 2.15 acres of land at Survey number 130/3 in Dattagalli where the MLA has built the Convention Hall. He alleged that the land — in the name of Anitha Mahesh, wife of Mahesh — has been converted only for residential purposes and the same is clearly mentioned in the RTC. But now the land is being used for commercial purposes, violating norms, he said.

Gangaraju’s visit to the RC Office was acrimonious where the RC asked him not to dictate terms of investigation. Both exchanged heated words and Gangaraju stormed out of the RC’s chamber demanding justice and threatening a hunger strike.

Later, speaking to reporters, he said, “Building licence and plan approval for the Choultry have not been taken from the competent authority and the sites developed in a MUDA Layout adjoining the Convention Hall too have been encroached by the MLA. Unfortunately, MUDA Chairman H.V. Rajeev and Commissioner Dr. D.B. Natesh are aware of it but are keeping mum. What is their connection with the MLA? Are they hand-in-glove?” he questioned.

“The Choultry has been in violation of norms and the building must be demolished,” he                  demanded, urging a fair investigation into all lands under survey numbers 98, 121,122, 123, 131, 132 and 133. There is no use in probing just the location of Convention Hall. All the survey numbers regarding which I have lodged complaints with Rohini Sindhuri have to be investigated,” he added.

Meanwhile, Assistant Commissioner Dr. N.C. Venkataraju has asked for records from MUDA Commissioner regarding encroachment of Government Gomala land at Survey Number 69 at Yedahalli in Jayapura Hobli where a private residential layout is coming up.

The MUDA Commissioner has been directed to come with records to the AC’s Office on June 15. RTI activist Gangaraju alleged that the residential layout is being developed after converting the Gomala lands at Survey Number 69 and 72 at Yedahalli.

Dr. G.C. Prakash N. Gangaraju Sa.Ra Convention Hall
IIM-Bangalore ranked Top B-School in India
‘I will continue to be CM for another 2 years’