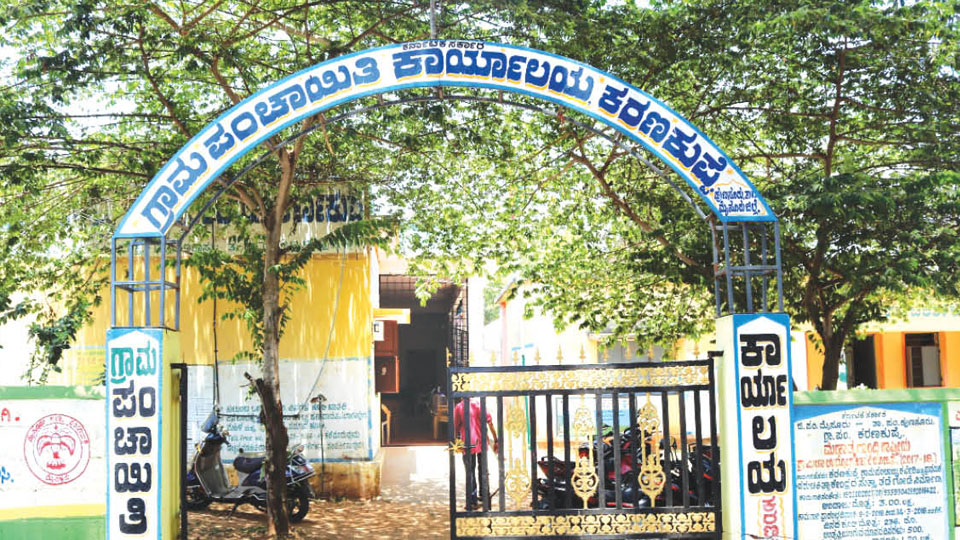 The credit for the GP to get the award is mainly due to the highly successful implementation of Mahatma Gandhi National Rural Employment Guarantee Act (MGNREGA). The GP did a wonder by generating 24,095 Man days as against the set target of 11,000. The GP has spent Rs. 90.15 lakh for purchases. Also, a record 640 soak pits were constructed as against the set target of just 50. Hareenahalli and Hakkemaala set a record of sorts by achieving 100 percent target. Another feature is that villagers have set up a mini-garden around soak pits at Hakkemaala.

A total of four lakes — Doddakere, Siddanakattekere, Beeranakattekere and Gaanadakere — have been developed under MGNREGA. More importantly, all encroachments on water tank areas and the bund have been cleared, which has greatly helped in water conservation. Also, de-silting of lakes has been taken up with support from ITC and Outreach organisation.

A total of five roads have been developed — Hemmige to Forest border road, Kanagalu to Kanagalamma Temple Road, two roads at Huliganahalli and Hareenahalli Tank Road.

The GP has spent Rs. 27 lakh under the 14th Finance Commission, most of which has been spent for development of schools. All schools coming under the GP, have been installed with a water filter, toilets for students, a welcome arch for each school, construction of  school compound, construction of drainages and decks, pipeline works etc.

During the COVID-19 crisis last year, a Village Task Force was set up in every village, which used to take stock of the situation by holding meeting twice every week — on Mondays and Thursdays.

As part of COVID-19 welfare measures, 15 shelterless families coming under the GP limits were distributed free Ration Kits. The adult members of these families were provided jobs under MGNREGA.

The GP also has the distinction of setting standards in solid waste disposal at village level. Volunteers in every village used to collect garbage and bring them to Karnakuppe for a centralised disposal. Such an initiative, not only helped in keeping the villages clean and tidy, but also created an awareness on a host of garbage issues.

In another first, Karnakuppe  Gram Panchayat held Gram Sabhas, Children Sabhas and Women Sabhas. Another notable feature is the conduct of social audit, which was done by a GP Committee.

Such Sabhas helped women and children raise their problems and get them addressed.

Above all, the GP staff have maintained records of all activities that have been done, which are open for public scrutiny.

Thanks to the concerted efforts of the previous GP President Papanna (presently GP Member), Vice-President H.M. Kumaraswamy, PDO Ramanna and youths of Kanagalu village led by Raghavendra, the GP has been able to achieve big on the National front too.

Ramanna had served at Kattemalalawadi GP, which has a majority SC population, for 9 long years. He was transferred to Karnakuppe GP two years ago and has earned respect from the villagers for his excellent job. Ramanna, who is Mechanical Engineering Graduate, has become well-versed in maintenance of villages, just as he did with machines during his course of study.

Raghavendra, a youth leader of Karnakuppe, says that Ramanna will work even on Sundays.

Hunsur Taluk Panchayat Executive Officer H.D. Girish says that Karnakuppe GP bagging Deendayal Panchayat Award has brought joy. This has been possible due to the efforts of PDO Ramanna and his staff and all those who preceded them. The Karnakuppe GP’s achievement shows that anything can be achieved through public co-operation.

GP Member Papanna, who is also a former GP President, said that the people of the GP were waiting for 30 years for development. Now their dreams have been realised with the execution of development works, he added.

Karnakuppe GP President Saraswathi says that she will extend full co-operation to GP PDO Ramanna for all the development works that will be launched.

Stating that she will seek the co-operation of all other GP Members, she said that development is the only way to express her indebtedness to the people who voted her.