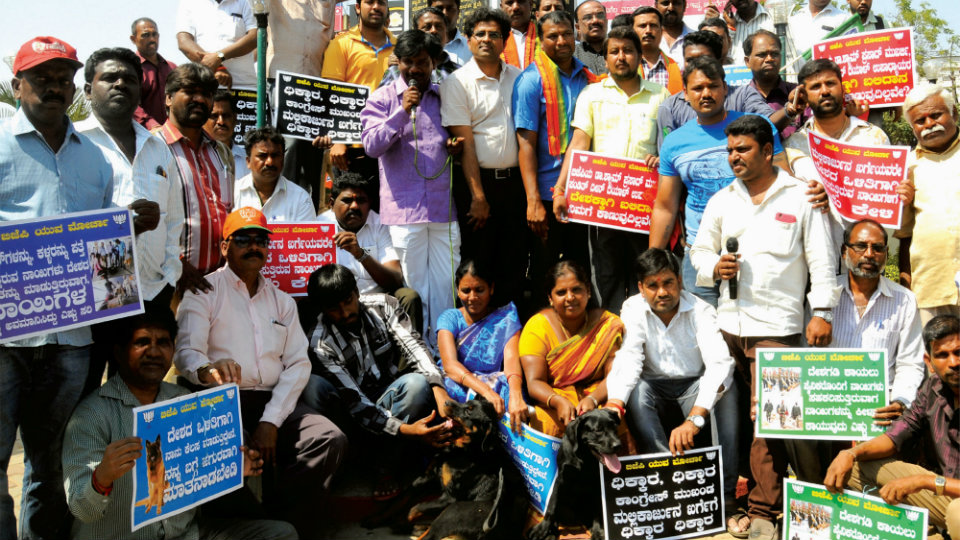 Strongly condemning Congress leader Mallikarjun Kharge’s reported remark in the Lok Sabha on Monday that ‘Not even a dog from the  BJP sacrificed its life for the country’s independence and unity,’ over 50 members of the City BJP Yuva Morcha staged a demonstration at Gandhi Square in city this morning.

Claiming that Kharge had even insulted the dogs through his remarks, the protestors demanded an apology from him (Kharge).

The protestors, who had brought pet dogs along with them to register their protest, raised slogans against the Congress leader.

Demanding waiver of water dues, more than 50 residents of Nachanahalli Palya (coming under MCC Ward No.12) under the banner of Socialist Unity Centre of India (SUCI), staged a demonstration in front of the DC office here this morning.

Claiming that the authorities were now issuing pending water bills along with accrued interest running up to thousands of rupees after JUSCO installed water meters in 2012, the protestors maintained that they cannot afford to pay such a huge amount. They demanded water dues waiver and free supply of minimum quantity of water to slums and dwellings where the poor lived.