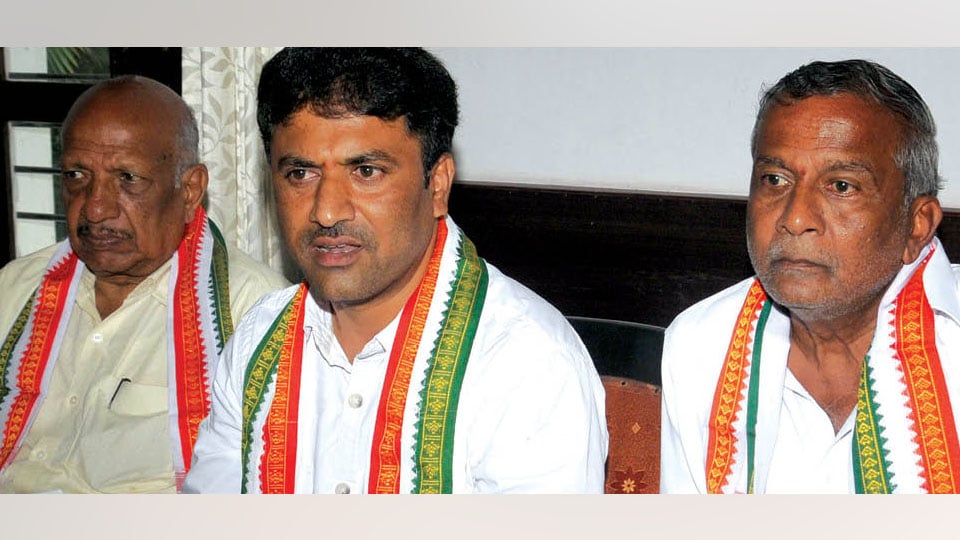 Mysuru:  Accusing ChamundeshwariMLA G.T. Devegowda (GTD) of indulging in rampant irregularities when he was the KHB (Karnataka Housing Board) Chairman earlier, the Mysuru District Congress has demanded a CBI probe into all the scams that took place in the KHB when G.T. Devegowda was its chairman.

Addressing a press meet here recently, District Congress President Dr.B.J. Vijaykumar alleged that GTD as KHB Chairman, had cheated scores of farmers who had parted with their land.

Questioning the sudden U-Turn by GTD who had said that Siddharamaiah was doing good work as the Chief Minister, Vijaykumar maintained that Siddharamaiah’s firm declaration at last Tuesday’s Hootagalli convention that he would contest for the last time in his political career from Chamundeshwari Assembly Segment had not only shocked GTD but has also scared him.  As such, GTD is now making baseless allegations against the CM, he said.

Lashing out at GTD for his remark that Siddharamaiah would be defeated for the third time if he opted to contest from Chamundeshwari, Vijaykumar said GTD’s ‘Karmabhoomi’ was Hunsur and not Chamundeshwari.

Former MLA Sathyanarayan said that it was Siddharamaiah who groomed GTD politically. Pointing out that GTD should not forget his past, he said that GTD’s remarks against the CM was unbecoming of him.

State Women’s Commission former Chairperson Manjula Manasa recalled the efforts of Siddharamaiah when he was in the JD(S) to get the JD(S) ticket for GTD to contest from Hunsur.

She also said that GTD had no moral right to make disparaging remarks against the CM now.