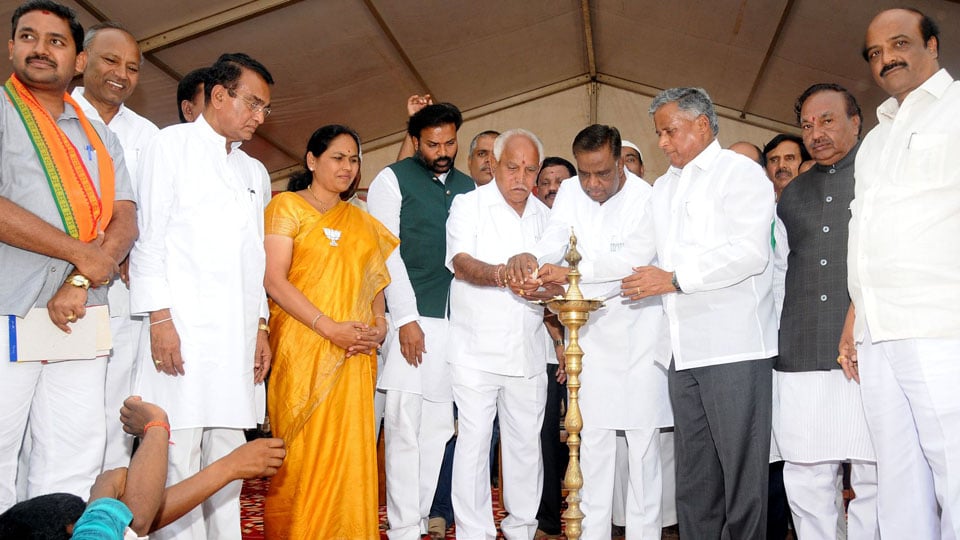 Nanjangud – Observing that political transformation in the State will begin with the victory of BJP candidate V. Sreenivasa Prasad in the Nanjangud by-poll, State BJP President B.S. Yeddyurappa (BSY) has said that the by-poll is a battle between the audacity of Chief Minister Siddharamaiah and self-respect of V. Sreenivasa Prasad.

Speaking after inaugurating a poll convention at Vidyavardhaka College ground in Nanjangud town yesterday, Yeddyurappa said that the 12th century social reformer Basavanna had said that the State treasury is people’s treasury, but Chief Minister Siddharamaiah after looting public money, is now engaged in distributing money among the electorate to win the by-polls.

Appealing the voters to ensure a 25,000 margin victory for Sreenivasa Prasad, BSY said that the electorate should set a record of sorts in the defeat of CM Siddharamaiah, who is distributing public money at will among the voters.

BSY also alleged that it was Siddharamaiah, who ensured the defeat of KPCC President Dr. G. Parameshwara in the 2013 polls and that it was the CM who humiliated Late former Minister M. Mahadev (Benki Mahadev) by manhandling him a few years ago. Lashing out at Siddu, for visiting late Mahadev’s house for the sake of votes, Yeddyurappa alleged that the Police recently raided Mahadev’s farm house at the instance of Siddharamaiah.

Claiming that the previous BJP Government had waived farmer loans twice, he said that the Siddu Government was only offering lip service to the farmers. Asserting that the BJP would win both the seats with a comfortable margin, Yeddyurappa asked the voters to lock up Congress workers who come to villages for distributing money, sarees and liquor in the night.

BJP candidate Sreenivasa Prasad in his address, said that Siddharamaiah had hurt his (Prasad) self-respect of unceremoniously dropping him from the Cabinet.

Maintaining that Siddharamaiah had been systematically finishing off senior leaders in the Congress, Prasad said that the CM’s Rs. 600 crore promise to Nanjangud was aimed at fooling the people.