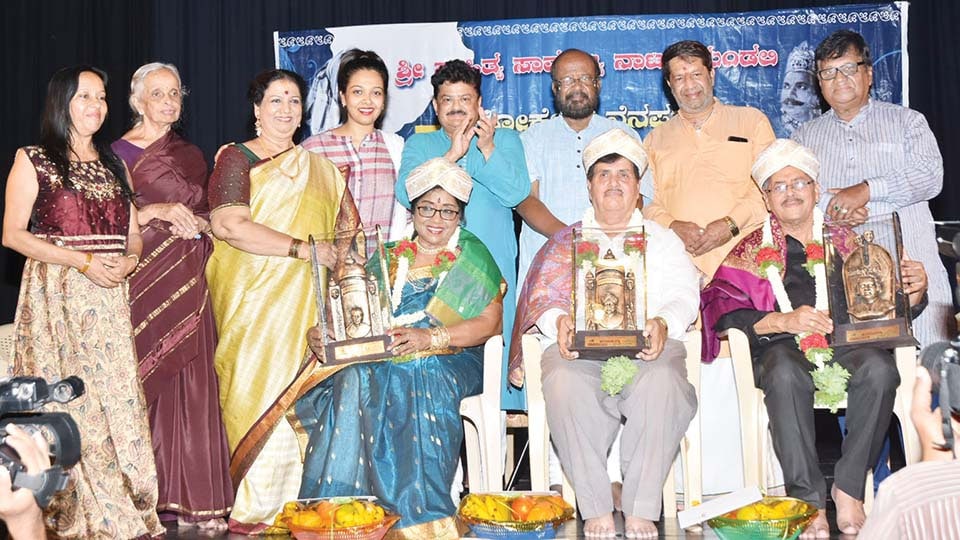 Both Girija and Lokesh never learnt the habit of reading books. They were not even reading the scripts given by the Directors properly. However, they would enter the characters of the people and deliver the dialogues the way the Directors had taught them, he said giving examples.

Girija, since the last 16 years, has been organising programmes and presenting awards in the name of veteran artistes Subbaiah Naidu, Lakshmi Bai and Lokesh. She has been spending her personal money that she has earned from her profession. Apart from this, she is also encouraging poor artistes without much fanfare. She has a mother’s heart and with that, she is able to do all these work, said Kappanna.

“Girija and I are childhood friends and we know one another from the time of acting in company dramas. Recalling the marriage of Girija and Lokesh, he said that both of them were acting in Kakanakote play. This play had to be staged in Bengaluru’s Kalakshetra. Just before that, they went to a Temple and got married and came back and performed in the role of father and daughter. At the end of the play, their marriage was announced to the public and they exchanged garlands,” he reminisced.

In another play Poli Kitti, when the actor donning the main character’s role passed away, Lokesh did not stop the play. He exhibited courage even in times of extreme sorrow and distress and staged the play. He had commitment to his profession. The commitment of the family to the stage is immeasurable. Even their social commitment is praiseworthy,  said Kappanna.

No one is remembering theatre world’s greatest icon B.V. Karanath. Many are parading themselves claiming to be his students, actors and friends. In that, including me, none of us have done anything to foster his memory, which is reprehensible and regrettable, he said.

Suruchi Rangamane’s Vijaya Sinduvalli, Girija Lokesh, Puja Lokesh and others were present. Actor Mandya Ramesh welcomed and Niharika rendered the invocation. After the programme, the play ‘Mruchhakatika’ was staged.