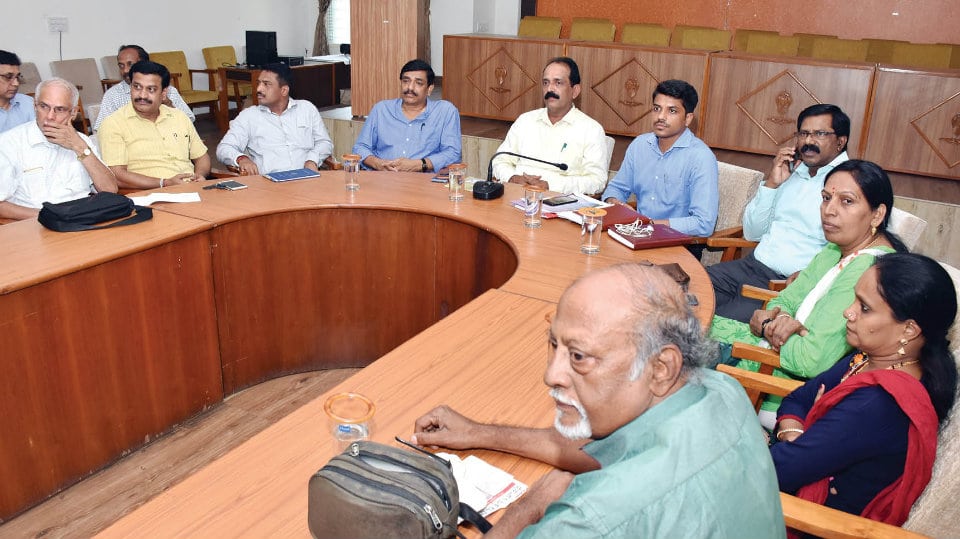 Make it compulsory to plant two saplings in every site

Mysuru: A law must be introduced to compulsorily plant two saplings in front of every site. The saplings must also be planted in the premises of schools and colleges. In functions and meetings, a culture must spread to distribute saplings. We ourselves should take steps to plant saplings, were some of the ideas and suggestions that came up yesterday at the preliminary meeting of Vanamahotsav celebrations to be held on June 5.

The representatives of NGOs and environmentalists, attended the meeting at the Aranya Bhavan in Ashokapuram yesterday, and shared their ideas to mark World Environment Day celebrations.

Mysuru Urban Development Authority (MUDA) Commissioner P.S. Kantharaju said that there are 960 layouts under the MUDA limits so far and if the site owners are asked to plant the saplings, they start arguing.

Hence, the Forest Department must pass an order to make the planting of two saplings in front of the 30X40 ft, 60X40 ft and 50X80 ft sites compulsory. If they do not do it, then their khata will not be done and layouts will not be modernised are the rules that must be enforced, he suggested.

Stringent punishment must be given to those who cut trees and the habit of putting up advertisements on trees by nailing them must be prevented, he urged.

Kannada Sene State President Anand Kumar said that when new layouts are formed, MUDA Commissioner must make it compulsory to plant at least two saplings. In the meeting, the absence of Mysuru City Corporation Commissioner is really a sad situation, he added. Selling saplings: Hunsur Spoorthi Association President Sudhamani alleged that under the Krishi Aranya Protsaha Yojane (Agriculture Forest Encouragement Scheme) the Range Forest Officers (RFO) are selling the saplings given under this scheme for Rs.5 each.

In this scheme, the farmers are given support price along with saplings to grow in their agriculture lands. However, the farmers should inform one year in advance as to how many saplings they need.

The scheme also provides opportunities for NGOs to grow the trees. But when the NGOs approach them they come up with the excuse that they have planted one lakh saplings and as it has rained, the sapling stocks are exhausted. The saplings meant for the public is being sold, she charged.

Chief Conservator of Forests Ambadi Madhav said that as part of World Environment Day, the city is going to be made greener and there are plans to plant 30,000 saplings. For this urban greenery plan, different Departments, NGOs and environmentalists must cooperate with the Forest Department, he added.

The Forest Department will take up the responsibility of planting saplings in schools, colleges and hospitals, apart from planting them in layouts, extensions and on the side of the roads. However, the responsibility of nurturing them by watering the plants must be taken up by the locals. Thus they should help in greening of the city, he said.

Deputy Conservator of Forests (DCF) Prashanth said that the meeting had been called with regard to transforming the clean city into a green one and suggestions gathered. This time as part of the Environment Day more importance is being given for air pollution control and in this direction, the greenery aspect is being given importance.

In the city and outer ring road planting saplings by the roadside and under Krishi Aranya Protsaha Yojane, farmers are being encouraged to plant saplings. In the city, 30,000 saplings of eight feet height and on ring road 20,000 saplings will be planted, he said.

In the rural areas, under Krishi Aranya Protsaha Yojane, nine lakh saplings will be distributed. For this, different species of trees have been grown in the district’s T. Narasipur, Nanjangud one each, H.D. Kote – 2, Mysuru – 3 nurseries. Depending on the height, the saplings will be sold between Re.1 and Rs.3, he explained.

Vijaynagar 3rd Stage Tree Lovers Club President M.N. Subramani said that trees of a few varieties could be planted even under the electric pole lines and it must be pruned to maintain the height at 11 or 12 feet.

He also pointed out that the Tree Committee, which was constituted by the Forest Department, is defunct now and called for the constitution of a new Tree Committee a the earliest.