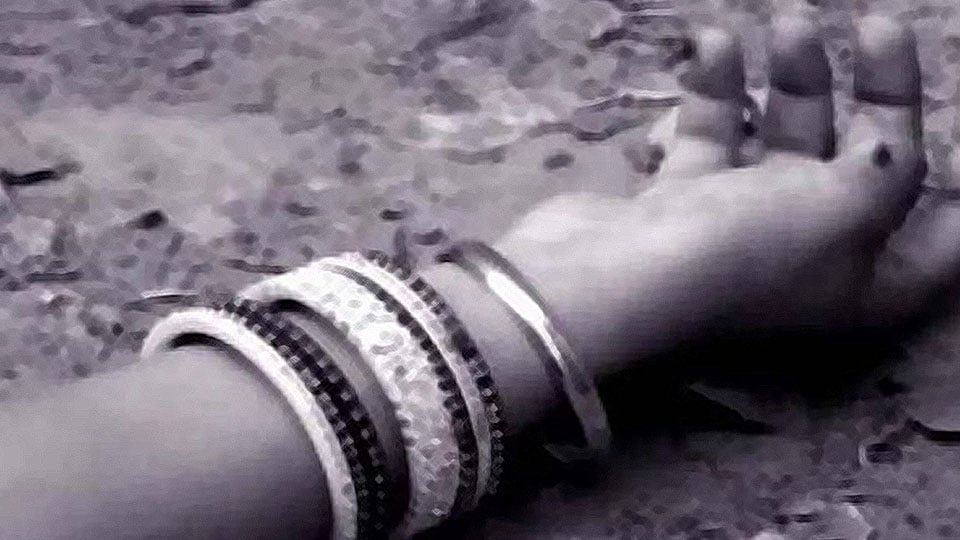 Periyapatna: A man, allegedly killed his wife by suffocating her to death and after two days, he called his relative over the phone and informed him that his wife had committed suicide. The incident took place at Booditittu village in Periyapatna taluk.

The deceased has been identified as Sowmya (24) while the accused husband is Swamy Nayaka, who has gone absconding.

Details: Swamy Nayaka, a resident of Booditittu village had married Sowmya, daughter of Ravi Nayaka and Mahadevi couple of Abbalatti village seven years back. Theirs was a love marriage and Ravi Nayaka had stayed in Sowmya house for six years after marriage. The couple have two children.

According to the complaint lodged by Sowmya’s mother Mahadevi, last year, Swamy took his wife to Booditittu and was staying there. Swamy, who used to suspect his wife’s character, began to fight with her frequently, it is learnt. On May 8, when Sowmya’s mother Mahadevi went to her daughter’s house, Swamy is said to have assaulted Sowmya. Mahadevi, who intervened, calmed them down and went back to her village.

On May 10, Swamy called Karthik, son of Sowmya’s aunt and informed him that Sowmya had committed suicide by hanging self two days back and asked him to go to the house as foul smell was emanating from inside. Karthik, who reached Booditittu village, went to Sowmya’s house during which the murder came to light. Periyapatna Police, who have registered a case, have launched a hunt to nab Swamy Nayaka, who is absconding.