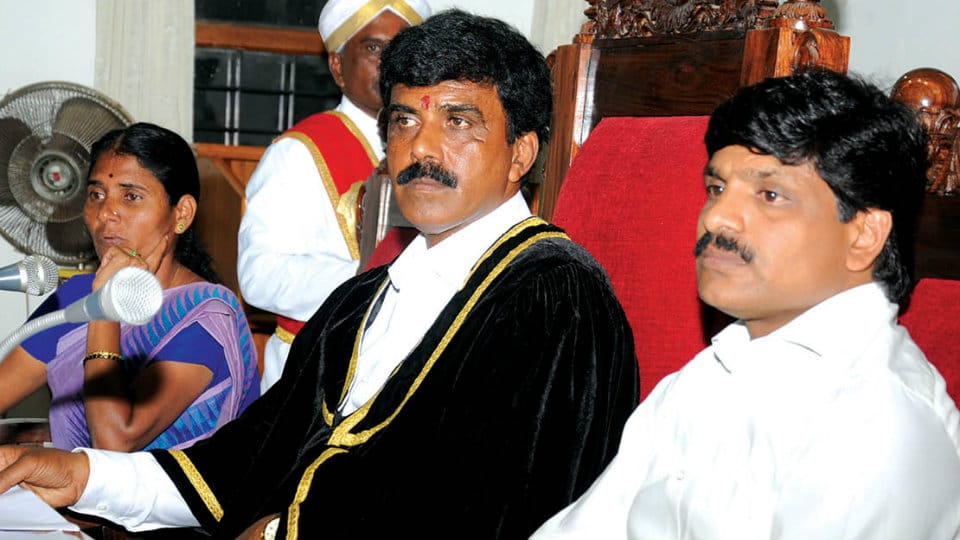 Mysuru: The Mysuru City Corporation (MCC) at its Council Meeting yesterday took a decision to collect pending rents from telecom companies and lay down rules to grant them permission for laying cables in future.

The decision was taken after a prolonged discussion at the Council Meeting Chaired by Mayor M.J. Ravikumar, held at the Nalwadi Krishnaraja Wadiyar Hall. Accordingly, along with conditions laid down, the revenue to the Corporation will also go up.

Since Corporator Prashanth Gowda raised the issue about the dues of Rs.76 crore that Reliance Telecom Company owed to the MCC, the issue was discussed at length.

Many Corporators spoke about the subject and sought clarification. As Town Planning and Improvement Standing Committee Chairman H.S. Nandeesh Preetham was not present at the meeting the Mayor asked the members to first finish the discussions listed in the agenda and then take up the issue.

However, a few members continued to argue on the issue. Meanwhile, Nandeesh Preetham joined the meeting and was ready to clarify the matter.

He said that when P.G. Ramesh was the MCC Commissioner, the rate was fixed at Rs. 4, 66, 670 per kilometre to lay cable and permission was given to Reliance Company to lay the cable at this rate.

The company has laid 400 km of cable and instead of laying it in a single lane, it had used four lanes. Hence, if a lane costs Rs. 18.66 crore, it will come to Rs.75 crore for four lanes, which the company has to pay, he said and added that the company had paid Rs. 40 lakh initially and the balance amount has to be collected.

Likewise, the pending dues have to be collected from other telephone companies for laying cables, he clarified.

Also, the cost of laying the cable has been revised to Rs.6.88 lakh per km and a rent of Rs. one lakh per year has been fixed for a kilometre,  were some of the decisions taken by the Planning Standing Committee, Preetham said and added that the Corporation is likely to get revenue of Rs.50 crore per year.

Mayor M.J. Ravikumar said that there must be a thorough investigation on the issue and if there are any dues from telecom companies, it has to be recovered legally.

Asking the officials to follow the rules laid down by the Standing Committees, he announced the decision of collecting the pending rents from telecom companies.

A unanimous decision was taken for eight development works. Apart from this, approval has been given to build water tank to store 13 million litres  of water in Yadavagiri, to take up repair work on water storage tank in Gayathripuram and construction of pump house in Hongalli.

Earlier, former Mayor Ayub Khan opposed the move to include all these issues in additional agenda.

He wondered how the Grants meant for Amrit Drinking Water scheme be utilised for such works and strongly opposed the idea with a few Congress Corporators protesting with him.

Following the protest, the Mayor adjourned the meeting for about ten minutes. After the meeting resumed, MCC Commissioner G. Jagadeesha clarified on the issues.

He said that out of the Rs.156 crore Grant under Amrit Scheme, Rs. 27 crore has been earmarked for setting up Power Sub-Stations. However, since CESCOM had decided to set up on its own, the money saved is being utilised for these purposes.

Out of the Rs.30 crore Grant for underground drainage works, Rs.18.87 crore is being utilised for stopping the flow of contaminated water into River Cauvery.

It has also been directed to take permission from the government’s High-level Committees and then take Council’ approval, he maintained.

Finally, all the Corporators gave their approval by thumping the desks.

Deputy Mayor Rathna Lakshman was present at the meeting.

This was the last Council Meeting that Mayor M.J. Ravikumar chaired, here yesterday.  Ravikumar of JD(S) had taken charge as the Mayor on Dec. 7, 2016 with the support of BJP with Rathna Lakshman from BJP as the Deputy Mayor. The election to the Mayor and Deputy Mayor’s post is scheduled to take place this month. During his tenure, 783 works worth Rs.188 crore were taken up. As a Mayor he has conducted budget meetings, special meetings and11 general meetings. In his farewell speech yesterday, he thanked all the Corporators, officials and staff for their co-operation.