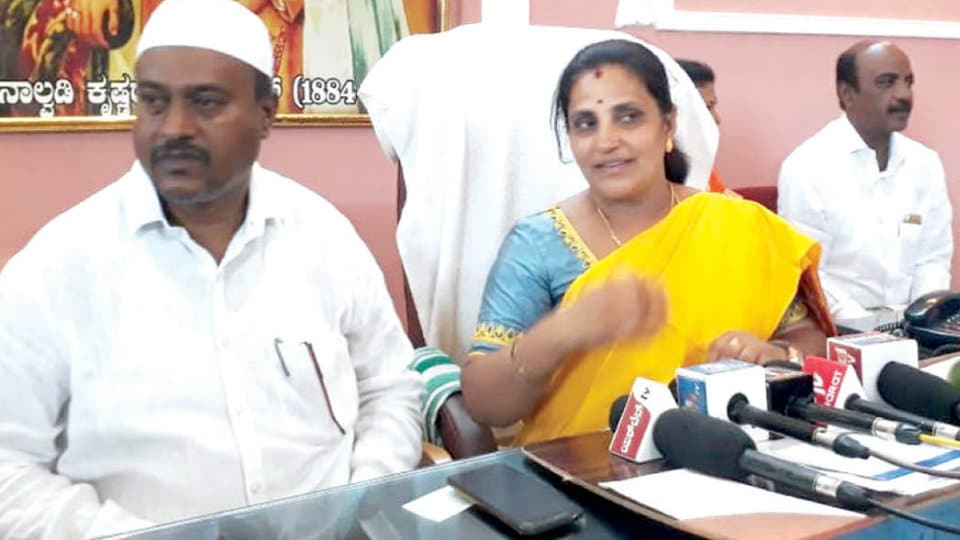 MCC has spent funds as per Govt. guidelines: Mayor

Mysuru:  City Mayor Pushpalatha Jagannath has refuted MP Pratap Simha’s claims that Government guidelines have not been followed in the spending of funds by the Mysuru City Corporation (MCC) and that there was discrimination in the MCC’s allotment of funds.

Addressing a press meet at her office here recently, Pushpalatha Jagannath maintained that there was no truth in MP Pratap Simha’s allegations made by him during the inspection of Vijayanagar Water Reservoir recently. Stating that the approval of BJP Councillors too was taken in the allocation of funds by the MCC, the Mayor said that the Wards represented by senior Corporators, irrespective of their party, were allotted Rs.1 crore to Rs.1.25 crore, which was in accordance with the guidelines laid down by the 14th Finance Commission.

Clarifying that funds will be allotted to senior Corporators without any discrimination, she reiterated that Rs.68.29 crore sanctioned by the 14th Finance Commission and the Rs.28.39 crore for SC/ST Welfare, have been distributed among the Wards in accordance with the Government guidelines.

Giving an account of the allotment of funds, Pushpalatha Jagannath said that Rs.1.30 crore has been allotted to her Ward, although as a Mayor she has the privilege for getting Rs.2 crore, Rs.1.15 crore to Deputy Mayor Shafi Ahmed’s Ward, Rs.85 lakh to former Mayor Ayub Khan’s Ward, Rs.1.20 crore to the Ward represented by Shivakumar of BJP, Rs.1.20 crore to the Ward represented by Usha Narayan and Rs.2.30 crore for Corporator Pramila Bharath’s Ward.

She further clarified that it was a practise to allot more funds to senior and SC/ST Corporators and ruled out allegations of discrimination in the allotment of funds.

Deputy Mayor Shafi Ahmed said that it was the Government which allots funds under various heads and works and the MCC has no role in fund allotment.

Taking objection to Pratap Simha’s allegation, he demanded an apology from him for making baseless remarks against the MCC.