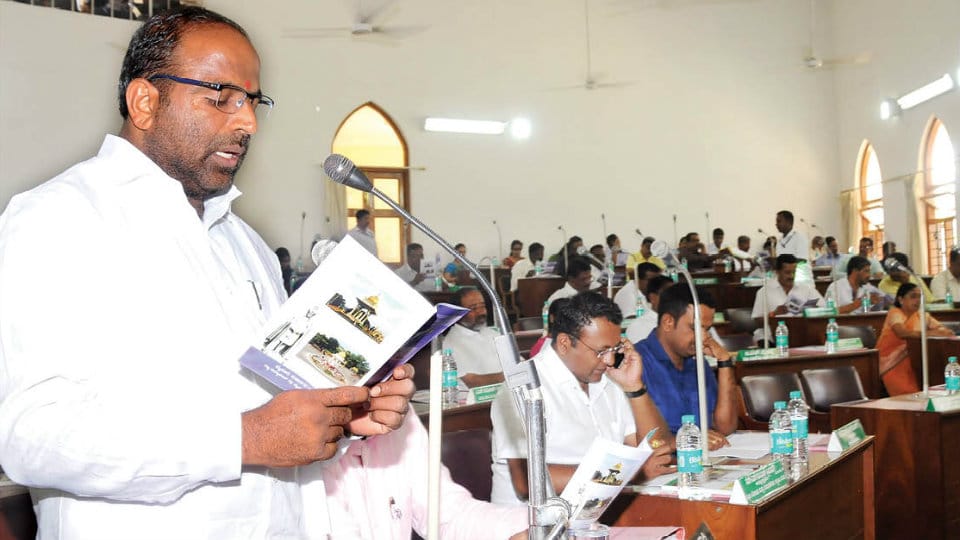 A surplus budget of Rs. 4.70 crore was presented at the Mysuru City Corporation (MCC) this morning. The budget for the financial year 2017-2018 was presented by Chairman of Finance and Taxation Standing Committee K.V. Mallesh at the Nalwadi Krishnaraja Wadiyar Hall at the MCC office.

Dressed in spotless white shirt, white dhoti and a white towel, Mallesh presented the budget amidst objection from the Congress Corporators who alleged that the budget figures had already appeared in the media and there was no point in attending the budget meeting.

The budget presentation was held under the chairmanship of Mayor M.J. Ravikumar. Deputy Mayor Rathna Lakshman and Additional Commissioner N. Raju were present.  Raju was officiating the budget meeting as the MCC Commissioner G. Jagadeesha has been appointed as the Election Officer for the Nanjangud by-elections to be held on April 9.

As soon as K.V. Mallesh rose to present his first budget, Congress Corporators objected and said that all the figures Mallesh was reading out had already appeared in the media. They alleged that the budget proceedings, allocation and expenditure were leaked to the media. They questioned the need of such a budget meeting when the figures were already out.

Intervening, Nandish Preetham of BJP said that it was a routine for media to publish the figures as they do in State and Union budgets. “The figures published in the media are only indicative and not the actual figures,” he said. Congress Corporators also said that it was not proper to present the budget in the absence of MCC Commissioner. The ruling JD(S) and BJP justified that Additional Commissioner had powers to conduct the budget meeting in the absence of MCC Commissioner.

The arguments over the leaked figures and the conduct of the meeting lasted for about 15 to 20 minutes and K.V. Mallesh began his budget presentation later. The budget has an opening balance of Rs. 190.2984 crore and the income expected is Rs. 679.2385 crore. The total budget size is Rs. 869.53 crore. The MCC is expecting Rs. 175.12 crore from property tax, Rs. 33.9 crore from water tax and Rs. 88.7 crore from the town planning section.

The projected revenue from trade licences is Rs. 8 crore and the income from MCC properties will come up to Rs. 3.81 crore. The civic body is awaiting State Finance Commission grants of Rs. 55 crore, Rs. 80 crore for streetlight and other electricity works, Rs. 25.5 crore from CM’s special grants and a grant of Rs. 50 crore to maintain heritage buildings and roads. A grant of Rs. 20 crore to make Mysuru slum-free and a grant of Rs. 20 crore for drinking water is expected from the State government.

The awards will be presented to one man and one woman who have contributed to the city welfare and the cash component of the award will be Rs. 50,000.