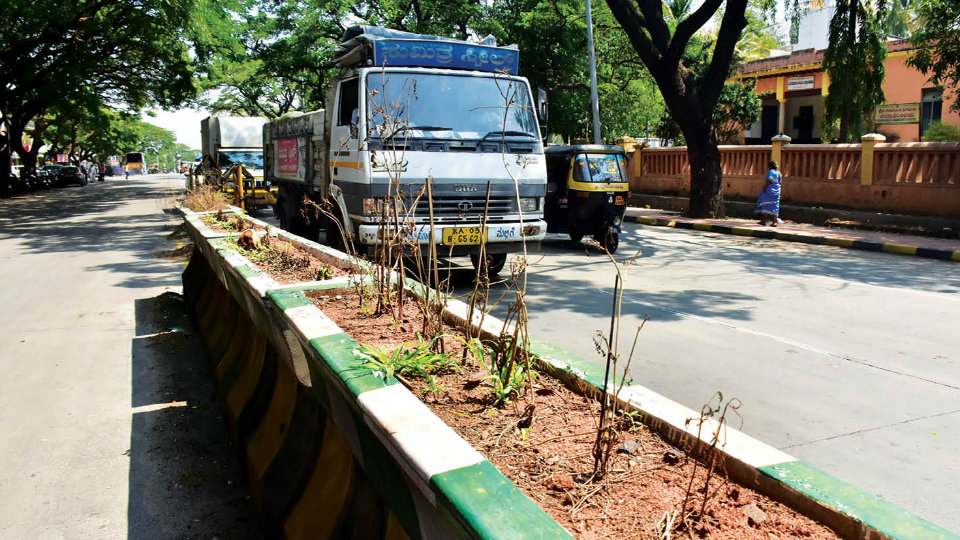 Mysuru:  The greening and beautification of the city was part of the Swachh Bharat campaign and hence many roads in the city with median strips were planted with eye-catching flowering plants. However, the plants on the median strip near Bamboo Bazaar on Sayyaji Rao Road opposite to the Deaf and Dumb School have gone dry.

Before the Swachh Survekshan, the Mysuru City Corporation (MCC) planted saplings in the median strip near Bamboo Bazaar on Sayyaji Rao Road, B.N. Road that starts from Hardinge Circle towards Gun House and Hunsur Road where there are pots with plants in them in the median strips.

In the beginning the Corporation would water these plants through water tankers. However, when the summer started the plants near Bamboo Bazaar were deprived of water and hence they have all dried up.

But the plants on the median strip on the east side of the Palace and on Hunsur Road are thriving and look green. Only if the Corporation continuously waters the plants till it starts raining will the plants survive, otherwise they will all perish and spoil the beauty of the city, felt a few citizens.

When Star of Mysore spoke to MCC Health Officer Dr. Nagaraj, he said that the Horticulture Department staff was watering the plants twice a week. Regarding the drying up of plants near Bamboo Bazaar, he would inspect the place and take immediate action, he added. The sole aim of the MCC is to keep the city green and so it becomes essential to water the plants regularly, he said.