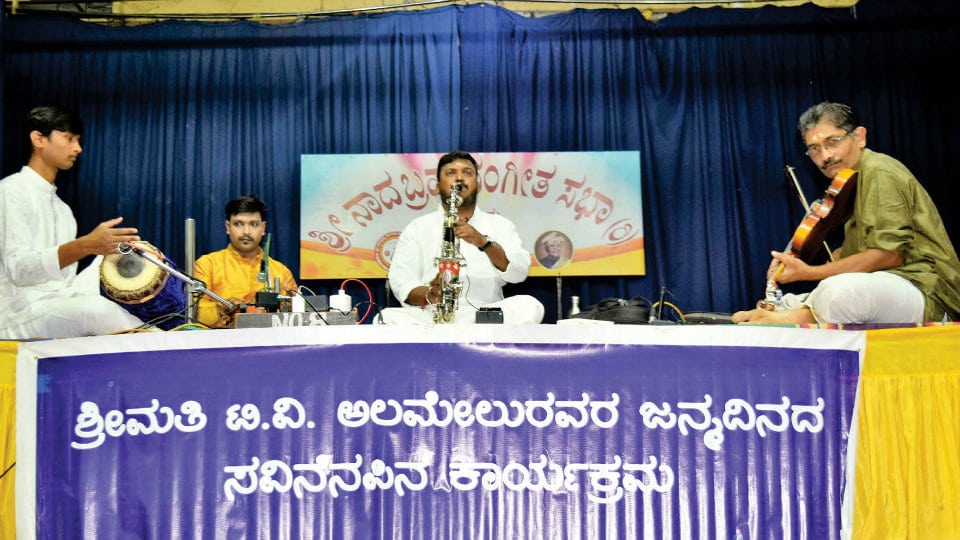 There are very few Saxophone artistes in music. It was Kadri Gopalnath who successfully adapted this western instrument into Karnatak music with certain modifications.

A young Saxophonist Harish Pandava from Mysuru performed for Sri Nadabrahma Sangeetha Sabha on Feb.9. He was accompanied on violin by C.N. Tyagaraj, mridanga by Vishnuvardhan and by Vikram Bharadwaj.

Harish chose to play popular compositions for the evening.  His controlled playing even in the higher notes bringing out melody in an instrument like Saxophone is praise-worthy. Pranamamyaham Sri Gaurisutam’ in Gawla by Mysuru Vasudevachar was suffixed by crisp enjoyable swaras.

‘Akhilandeshwari Raksha Maam’ by Deekshitar in Dwijavanti was an intelligent choice and was played in a suitable pace and shobhillu Saptaswara’ (Tyagaraja) in Jaganmohini  was lively. ‘Swarakshara’ in the composition at ‘Dharahrtsaamaadulalo’ was appreciative.

‘Ganamurthe Sri Krishna Venu,’ another popular number by Tyagaraja, was a good filler, which was immediately followed   by Ra Ra Rajeevalochana Raama’ in Mohana dealt with in detail. Tyagarajan’s Mohana was equally enchanting. Delightful swaras to the pallavi portion were pleasing and the Taniyavartanam by Vishnu Vardhan and Vikram Bharadwaj was delectable.

A twenty-minute RTP followed as there was a little time left. Shanmukhapriya saw some rare sangatis  in the alapana, a rhythmic tanam tempting the mridangist to follow and a simple pallavi on Muruga — ‘Sharavana Muruha Guha Vinayaka Sahodara’ set to Trishra Triputa Tala. ‘Jagadoddharana’ by Sri Purandaradasaru, ‘Radha Sameta Krishna’ of GNB fame and ‘Bhagyada Lakshmi Baramma’ also by Purandara Dasaru formed the concluding part of the concert.

Saxophone and Clarinet are instruments which many Karnatak music learners would not pursue. It is heartening to see young artistes like Harish taking this instrument seriously. Music organisations too should realise the worth of these instruments and encourage such artistes by giving them more opportunities.