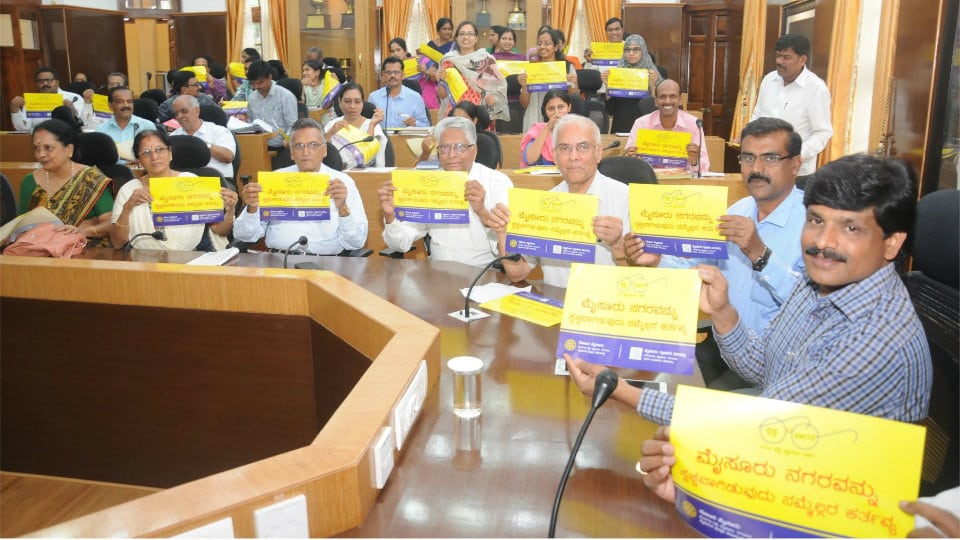 Mysuru: Member of the Mysore Grahakara Parishat (MGP) Bhamy V. Shenoy suggested to the Mysuru City Corporation (MCC) to provide excellent service to the citizens who are paying their taxes to the Corporation.

He was speaking at a meeting on ‘Creating Awareness about Consumer Rights’ organised by the MGP with the MCC officials here yesterday at the Old Council Hall in the MCC premises.

He told the officials who were working under Corporation limits that they were also citizens like ordinary people and urged them to respond to the people’s problems at the earliest when they came with issues like birth and death certificates, property tax, water bill, Mysuru’s cleanliness, water distribution and others. “The officials should understand that people are the owners,” he said.

When the Corporation officials give licences to the commercial establishments, they should advise the shopkeepers to always give bills for goods purchased to the consumers.

Shenoy urged the Corporation officials to participate in the ‘National Consumers Day’ to be celebrated on Dec.24.

The MGP Members also assured of their cooperation with the MCC to see that the city regains the top spot in cleanliness in the country by participating in the Swachh Campaign. “We have already visited various extensions and distributed pamphlets regarding Swachh Andolan,” said Shenoy.

MCC Commissioner G. Jagadeesha speaking said that it would be useful for everyone if they understand about consumer rights. “The mobile service provided by various service providers that all of us use every day is of very poor quality. Downloads are very slow. Please file cases in Court regarding this issue,” he urged the MGP Members.

All the mobile companies are advertising that they are providing 4G and 3G services and collecting nearly Rs. 40 crore to Rs. 50 crore every year. However, in most of the extensions in Mysuru it is only 2G network they are providing but claiming it as 3G and 4G network. Hence, all mobile companies are cheating, he charged. “If MGP is prepared to fight for the cause in the Courts then we will provide all cooperation and assistance,” he said.

No permission for 4G cables

All the mobile companies are claiming that they have 4G network. However, the truth is the Corporation has not given permission to any company to lay 4G network cables. At present, 90% of the connections is being served by 2G network in the city. Only in a few layouts there is 3G network, he said.

Additional In-charge Commissioner Javaregowda, speaking on the occasion, said that a few months ago, a person had brought a Consumer Court order, which had directed the Corporation to give khata under Corporation limits. “I was surprised to see the order because the Corporation has no powers to give khata that comes under Revenue land. If we do it then we will go to jail. This comes under Deputy Commissioner’s jurisdiction. It was a herculean task to make the person understand this point. Hence, if the Consumer Courts pass such orders, the officials are bound to get into problems,” he told the Members.