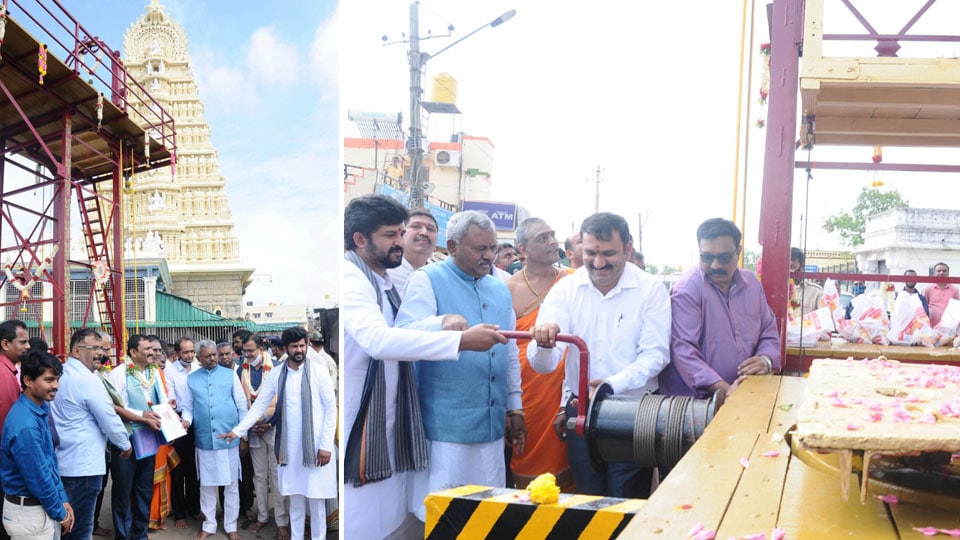 Mysore/Mysuru: Co-operation and District in-Charge Minister S.T. Somashekar has handed over a new carriage-cum-lift of Sri Chamundeshwari Temple atop the Chamundi Hill, which will be used to place the idol in the elevated seat in the temple chariot during Dasara Rathotsava, to the Temple authorities.

The carriage-cum-lift had been renovated by the Central Workshop of Mysuru Division, South Western Railway.

At a simple function held atop the Hill yesterday morning, the Minister handed over it to Yathiraj Sampathkumaran, Administrator, Chamundeshwari Temple and Jagadish, Muzrai Tahsildhar. The Minister said the lift had been helpful to place the Utsava Murthy atop the Rath during Dasara.

Mysuru-Kodagu MP Pratap Simha said the Temple was in need of a lift to place the Utsava Murthy atop the Ratha during Rathotsava as the existing one was in dilapidated condition. The temple chief priest Dr. N.Shashishekar Dixit had made an appeal in this regard. Now, a new lift had been readied at a cost of Rs.5.50 lakh.

He said the Minister had given instruction for the shifting of vendors from both sides of the road leading to the temple, and to provide facilities to the visiting devotees.