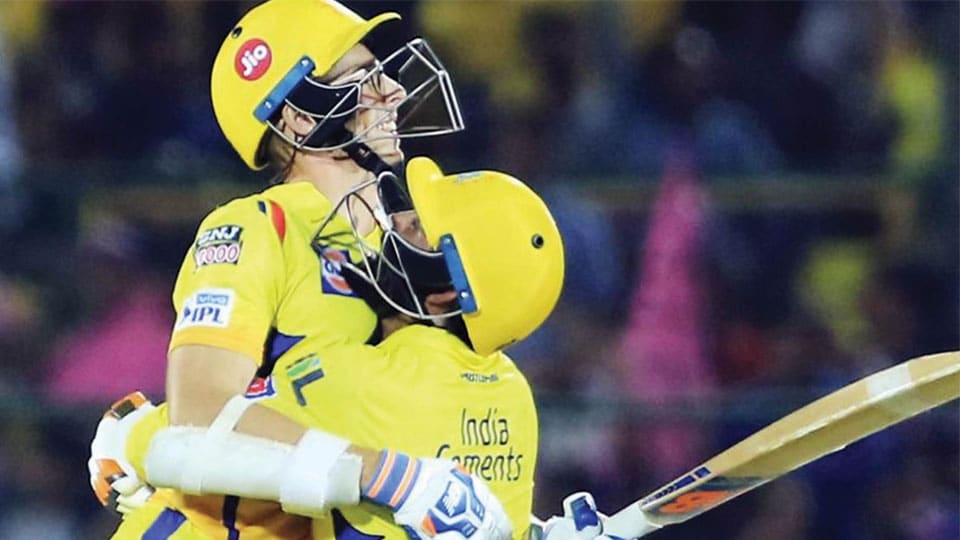 Mitchell Santner smoked Ben Stokes for a six in the last delivery to propel Chennai Super Kings (CSK) to a miraculous win in a drama-filled encounter against Rajasthan Royals (RR) at the Sawai Mansingh Stadium in Jaipur on Thursday (Apr. 11).

Chasing 152, MS Dhoni (43-ball 58) and Ambati Rayudu (47-ball 57) got closer to the target, but it was in the final over where all the drama unveiled. Needing 18 to win, Ravindra Jadeja somehow managed to hit the first ball for six despite losing his balance and falling onto the ground. Stokes then knocked over Dhoni in the third delivery to leave 8 off 3.
Just when we thought the drama was over, the main umpire signalled a no ball in the fourth delivery and then all of a sudden backed out. Such was the confusion that it even forced Dhoni to come out of the dugout and he was clearly unhappy with how things folded out. However, Santner kept his calm and hit 2, 2, wd and 6 to pull off a spectacular win for his team and gave Dhoni his 100th win as captain in IPL.

Asked to bat, Rajasthan kept losing wickets at regular intervals before some handy contributions from the lower middle-order took them to 151 for 7 in 20 overs. In reply, Dhoni and Rayudu added 95 runs for the fifth wicket after Chennai’s top-order was blown away. However, it was Jadeja and Santner who got them over the line.
Earlier, Ajinkya Rahane and Jos Buttler walked in with the purpose of going after Chennai’s most reliable powerplay bowler Deepak Chahar (2 for 33) and the latter’s 4 and 6 in the very first over was proof of that. Rahane too showed some positive signs by crafting two boundaries off Mitchell Santner’s (1 for 25) bowling but just when it looked like everything was going well for the home team, Chahar struck.

Despite Rahane moving too much inside the crease, Chahar kept it nice and straight and ended up pinning the Rajasthan skipper right in front of the leg-stump for 14. Buttler, however, kept the attack going and slammed Shardul Thakur (2 for 44) for three consecutive boundaries, but got extra greedy and ended up paying for it. The wicket-keeper-batsman wanted to thump short of length delivery down the ground but lost his shape in the process and ballooned a catch to Ambati Rayudu at extra cover region for 10-ball 23.
Making his return to the side following an injury, Sanju Samson (6) too couldn’t carry on and became Santner’s first victim. Steven Smith (15) and Rahul Tripathi (10) stuck for a while but fell to Ravindra Jadeja (2 or 20) in the space of two overs, allowing the left-arm spinner to touch the 100-wicket mark in IPL. While Tripathi was caught brilliantly by Kedar Jadhav at point, Smith needlessly swept one straight into the hands of the deep mid-wicket fielder.

Ben Stokes (28), debutant Riyan Parag (16) and Jofra Archer (13) all chipped in but it was Shreyas Gopal’s (7-ball 19) contribution that made some difference in the end. The 25-year-old smashed two fours and a six in the last two overs and pushed his team past the 150-run mark.

Chasing a tricky total, Chennai got off to a worst possible start, losing four wickets inside six overs. Shane Watson looked clueless against Dhawal Kulkarni and ended up getting knocked over for nought. Meanwhile, Suresh Raina (4) was caught ball-watching while taking a possible single and Archer hit the bullseye at non striker’s end.

READ ALSO  IPL 2019 likely to be shifted to foreign venue

After Faf du Plessis (7) fell to Jaydev Unadkat, Kedar Jadhav (1) was outdone by Stokes’ brilliance on the field. The right-hander sliced one to the left of Stokes at point but the English all-rounder timed his jump to perfection to pull off a stunning catch. Having been reduced to 24 for 4 at the end of six overs, Chennai needed a huge partnership and Rayudu and Dhoni didn’t disappoint. The two started slowly before Dhoni smashed Shreyas Gopal for a maximum over long on to break the shackles. With Dhoni making sure that the required run-rate stays within the reach, Rayudu too joined the party. The right-hander hit two sixes and a four in the space of two overs to complete his half-century and brought the equation down to 51 off 30 deliveries. M. S. Dhoni was chosen Man of the Match.