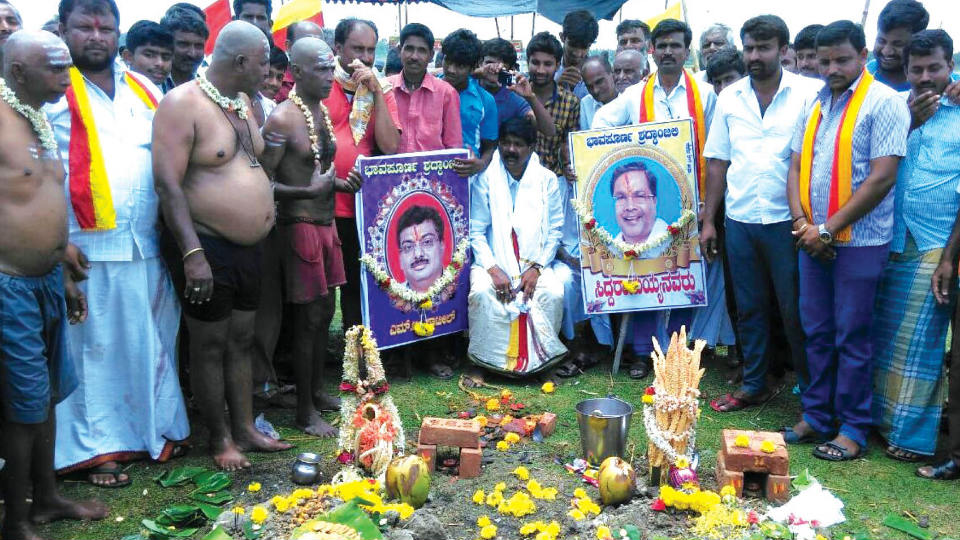 Activists of the Karnataka Janapara Vedike yesterday performed mock obsequies ceremony (Thithi) of Chief Minister Siddharamaiah and Water Resources Minister M.B. Patil in  Maddur to vent their ire against the State Government for its failure to respond to their demands.

The residents of surrounding villages took part in the rituals and built graves out of soil and decorated them with flowers. Later, they offered vade, kajjaya, chakkuli, kodubale, kadalepuri and performed puja.

Activists Siddaramu, Srinivas and Krishnegowda tonsured their heads to mark the ceremony. The activists also shouted slogans against the State Government stating that, “You people died without releasing water into the canals. May your soul rest in peace.”

According to protesters, their repeated pleas and protests seeking release of water from KRS Dam into the canals has not been considered by the Government. “In our view, the Government has died. Hence, we have performed the ‘Thithi’ of the CM and the Minister,”they said.

In Mandya, members of the Raitha Sangha tried to grab the attention of the people by erecting flex boards on the Mysuru-Bengaluru Highway to condemn the elected representatives of the district for their “failure” to take steps to release water into the canals.

CM Siddharamaiah Karnataka Janapara Vedike M.B. Patil
“Give me power and three months time, I will get UGC recognition for KSOU”
Cauvery water release to canals: High-level meeting to be held in a day or two