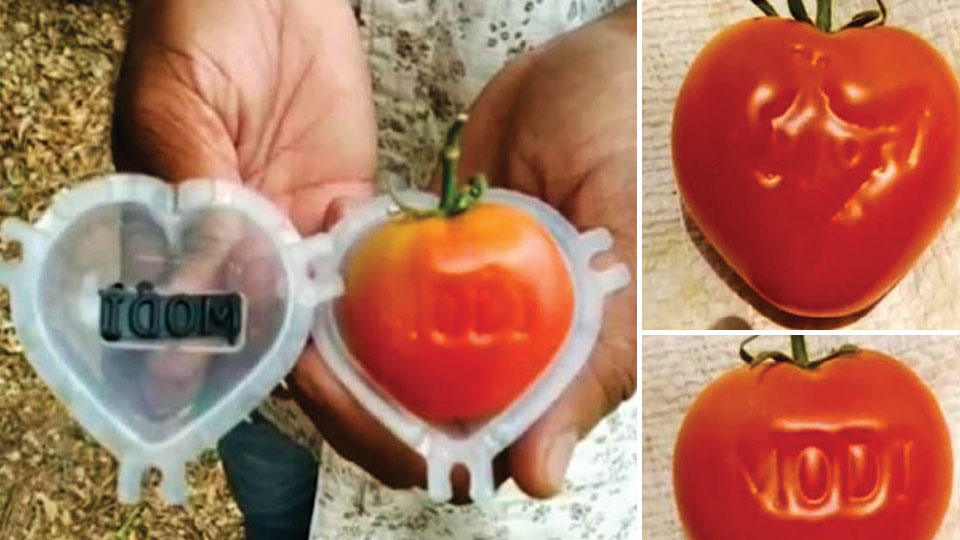 Vijayawada (Andhra Pra-desh):  The unprecedented sea of saffron that was witnessed on the streets of Varanasi during Prime Minister Narendra Modi’s Varanasi Road Show, raised a crucial question — Is there a  Modi wave?

If the mega Road Show with BJP flags fluttering and showering of flower petals at Varanasi may have indicated a ‘Modi wave’ in one way, people in their personal endeavours have taken this political enthralment to another level — with tomatoes.

A tomato farmer from Madanapalle in Andhra Pradesh has begun to brand his tomatoes by putting Narendra Modi’s name on them. Plastic moulds were seen wrapped on to the tomatoes which later leaves Modi’s name on one side and Indian map on the other side of the tomatoes.

According to reports, there is a lot of demand in the market for the tomatoes with PM Modi’s name on them. A tweet that has now gone viral, as reported by a local news channel, says that the tomatoes have been selling at a 25% premium and are being exported.

These tomatoes are in the shape of a heart with letters ‘Modi’ embossed on one of its sides and India’s map on its other. This tomato is the result of combined efforts of Janardhan Chowdary Jampala, a US-returned software engineer-turned-agro producer, and Racharla Siva Kumar Reddy, an enterprising farmer from Madanapalle in  Chittoor district.

The tomatoes were presented to Uttar Pradesh Chief Minister Yogi Adityanath during his recent visit to Andhra Pradesh.