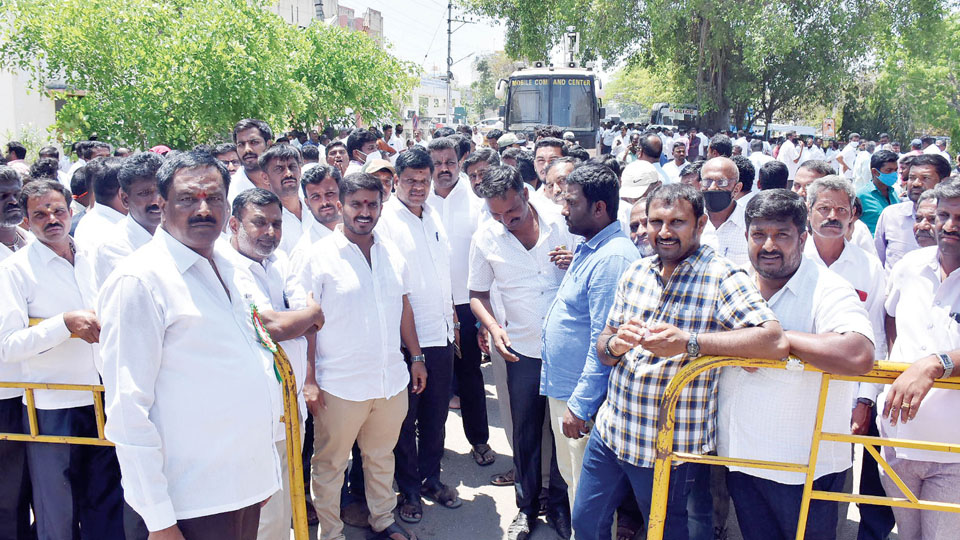 Mysore/Mysuru: The voting for MyMUL (Mysuru Milk Union Limited) polls to elect 15 Directors, which began on a sedate note this morning, picked up as the day progressed, amidst soaring temperature.

The election to the Co-operative body has turned out into a proxy war between KR Nagar JD(S) MLA S.R. Mahesh (with backing of former  Chief Minister H.D. Kumaraswamy) and Chamundeshwari JD(S) MLA G.T. Devegowda, who has fallen out with party leaders.

The voting is taking place at KMF (Karnataka Milk Federation) Training Centre in Mega Dairy premises at Alanahalli  on Bannur Road in the city. There are a total of 1,052 voters, who are select members from all Milk Producer Co-operative Societies of the District.

The  poll is taking place to elect 15 Directors — 7 from Mysuru Sub-Division and 8 from Hunsur Sub-Division, for a  five-year term.

The voting which began at 9 am picked up momentum as hours passed by, with electors from all parts of the district arriving  individually and also in groups by buses, Maxi cabs and other public transport vehicles.

Although the polls are not held on party lines, the election has taken a political  colour and contour with both G.T. Devegowda (GTD) and H.D. Kumaraswamy (HDK) taking it as a  prestige issue.

Taking the election to the Milk body seriously perhaps for the first time in his decades of political career, Kumaraswamy visited the city a couple of times  earlier this month to ensure that the candidates backed by party MLA S.R. Mahesh, who is closely associated with HDK, win the most number of Director posts and thus take control of the Milk body.

On the other hand, GTD too has evolved his own strategies to see through it that candidates supported by him sail through.

With  the commencement of polling, the scene at KMF Training Centre  resembled much like a scene from  Assembly polls, with supporters of candidates holding placards, posters and pamphlets that carried the symbols of the candidate they backed at the entrance, in a last minute bid to woo the voters.

Even as polling was underway, a verbal duel broke out between rival candidates Sadananda  and K.G. Mahesh, which ended after intervention by the Police. There was also a verbal duel between JD(S) ZP member Beerihundi Basavanna and a candidate backed by GTD group. Amidst this, MCDCC Bank President G.D. Harish gowda, son of MLA G.T. Devegowda, visited the polling venue to take stock of the voting trend.

Voting will conclude at 4 pm, following which the counting of votes will be taken up after a short break. The results are expected to be announced later in the evening, when the fate of all the contestants would be known.

Of the 15 Director posts, 11 are reserved for General Category and 4 for women candidates.

The election was held under tight Police security.