Home » News » Mysuru selected for Mass Yoga with PM on June 21: Committees to be formed for smooth conduct of mega event 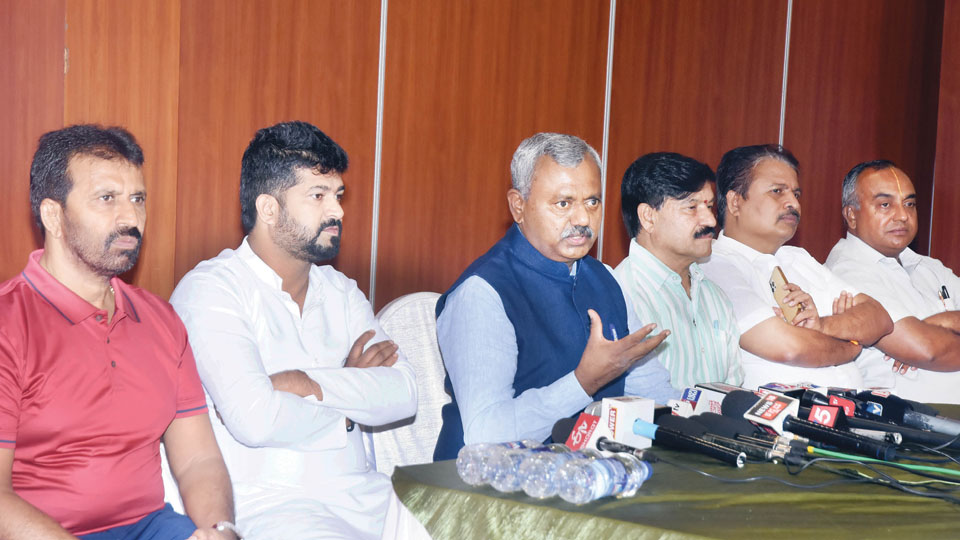 Mysuru selected for Mass Yoga with PM on June 21: Committees to be formed for smooth conduct of mega event

Mysore/Mysuru: Committees will be formed and responsibilities will be assigned to ensure that the preparations for the International Day of Yoga, the event per se and the conclusion of the mega event pass off smoothly in view of Prime Minister Narendra Modi agreeing to lead this year’s mass yoga performance in Mysuru on June 21, said District Minister S.T. Somashekar.

Addressing reporters at Hotel Southern Star on Vinoba Road this morning, the Minister clarified that the venue for the yoga performance has not been decided yet as the call will be taken by the Prime Minister’s Office (PMO), the Special Protection Group (SPG) and also senior officials from the AYUSH Ministry.

Though the press conference was slated at 9 am, the Minister arrived an hour late. He wrapped up the press briefing in just seven minutes when he disclosed the formation of Committees where all the elected representatives will be involved.

“As of now, the Mysore Palace and the Mysore Race Course are the two venues and the final decision will be taken in New Delhi. Before that, officials from the PMO and SPG will visit Mysuru and we will show them more venues. They will take a call,” Somashekar said.

Union Minister Pralhad Joshi will come to Mysuru on May 30 to oversee the preliminary preparations and decisions will be taken in consultations with him, he added.

The Committees to be formed under the leadership of MLAs, MLCs and the MP will ensure that there are no lapses in preparation and also during and after the event. The Committees will function in tandem with the Mysuru Yoga Federation, District Administration and the AYUSH Department, he added.

“We are looking at the possibility of creating a Guinness World Record for the second time (Mysuru created a Guinness Records in 2017 in the largest yoga lesson category) and meetings will be held to chalk out the ways and means. As PM Modi is attending the event, the world’s attention will be on Mysuru. All necessary measures will be taken to ensure that Mysuru’s image is not sullied,” Somashekar added.

The tourism and hospitality sectors will get a big boost and already, there have been enquiries of participation in the yoga performance from Mandya and Bengaluru. Plans will be chalked out to make the event incident-free and grand success, the Minister said.

Reporters drew the Minister’s attention into the pathetic condition of Mysuru roads,  to which, Somashekar said that he would meet CM Bommai after he returns from Davos on May 26. However, there was no explanation on how the roads will get a facelift in such a short time.