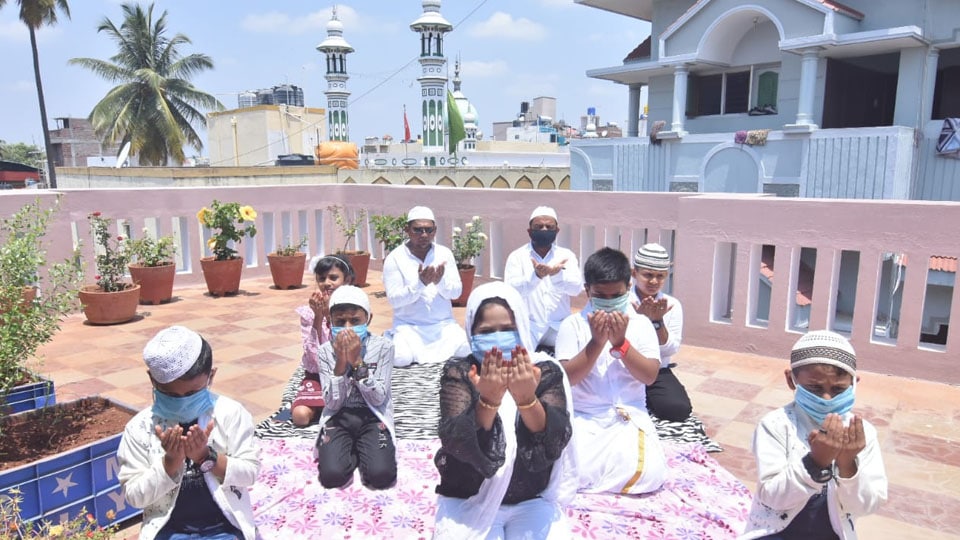 No mass prayer gatherings at Eidgah Maidan, no handshakes

Mysore/Mysuru: Under the shadow of Coronavirus, Muslim community people are taking special precautions to mark Eid-ul-Fitr, the celebration today that breaks the month-long fast for Ramzan. This Eid there was no shaking of hands or no warm embracing for community members because of the stringent social distancing norms.

Prayer gatherings, outdoor festivals and other public events have been curtailed or cancelled to prevent the spread of the virus. As such, community members opted for at home prayers where family members got together inside rooms and terraces and prayed. Also, as virtual is the new reality, community members wished each other on video calls.

The most important public aspect of Eid-ul-Fitr is the special morning prayers offered in Eidgahs, which are large open spaces. It is called the Eid Namaz. Dressed in their best clothes, sporting colourful caps and smelling of perfume (Attar), the devout pray to the Almighty in gratitude for blessing them with the holy month of Ramzan.

Ever year in the past, thousands of Muslim brethren used to gather at Eidgah Maidan in Tilaknagar in city to offer mass prayers. This year, however, there were no public gatherings.

The Eid Namaz also has the ubiquitous practice of hugging and shaking hands – to promote brotherhood. The holy prayers were offered by the community members at their homes between 6 am and 11 am today. Only selected four to five people were present at Mosques to offer prayers so that the tradition is not broken.

“There was no typical ‘gale milana’ (wishing each other with warm embracing) this year. The festive atmosphere was missing this Eid. Fighting the dreaded virus and saving humanity is more important than celebrating Eid,” said Anwar Ahmed from Udayagiri.

The Wakf Board had appealed to the community members to pray safe staying at their homes. Muslim religious leaders and the Sir Khazi of Mysuru Mohammad Usman Shariff too had given a call for safe celebration of Ramzan by offering prayers at homes.

With lockdown regulations in place, people were seen exchanging greetings through cell phones. However some people attempted to enter the Kabrastan behind the Central Jail to offer prayers to their departed near and dear ones. But they had to retreat as there was a posse of Policemen posted at the spot.