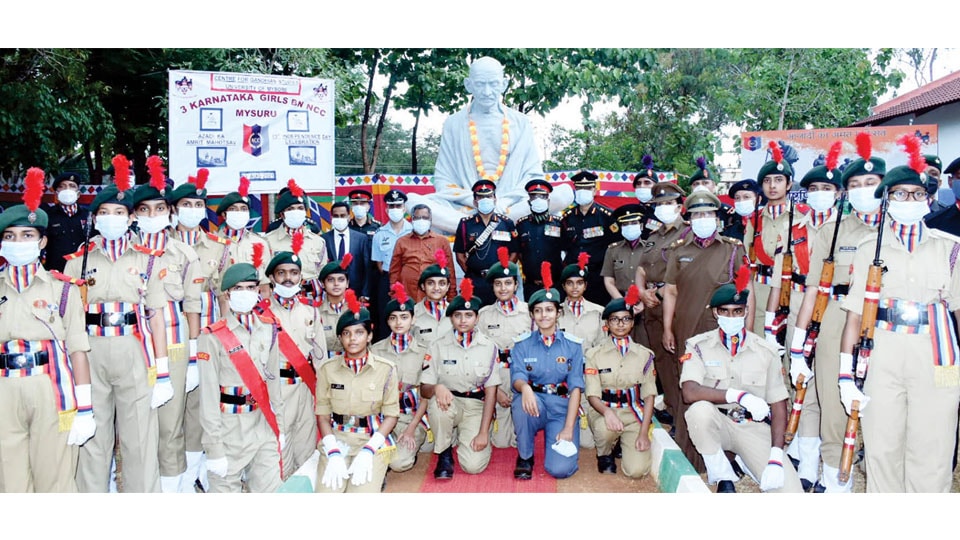 Mysore/Mysuru: The Armed Forces and different organisations of the Ministry of Defence conducted various events across the country to commemorate the 75th anniversary of India’s Independence, being celebrated as ‘Azadi Ka Amrit Mahotsav‘.

Defence Minister Rajnath Singh formally launched various major events virtually from New Delhi this morning. To coincide with this, Group Headquarters of NCC Directorate Karnataka and Goa in Mysuru organised an event today at Centre of Gandhian Studies at the main entrance of University of Mysore.

The event was marked by a wreath-laying ceremony, speeches by cadets on the freedom struggle, recitation of poems on independence and other patriotic songs. The event was streamed live to New Delhi.

Singing National Anthem: As part of the ‘Azadi Ka Amrit Mahotsav’ the Union Government has launched a website  rashtragaan.in where students can upload their ‘individual rendering’ of the National Anthem.

All the videos shared by students will be compiled into a single video and will be played live on Independence Day. Selected participants may also get a chance to feature in a new song by one of India’s leading lyricists and composers.

The Top 100 videos will be selected for the song to be launched on TV, Radio, YouTube and Social Media platforms. The official YouTube page of MyGov India shared a video titled ‘Let Us Sing The National Anthem’, giving step-by-step instructions on how to participate.