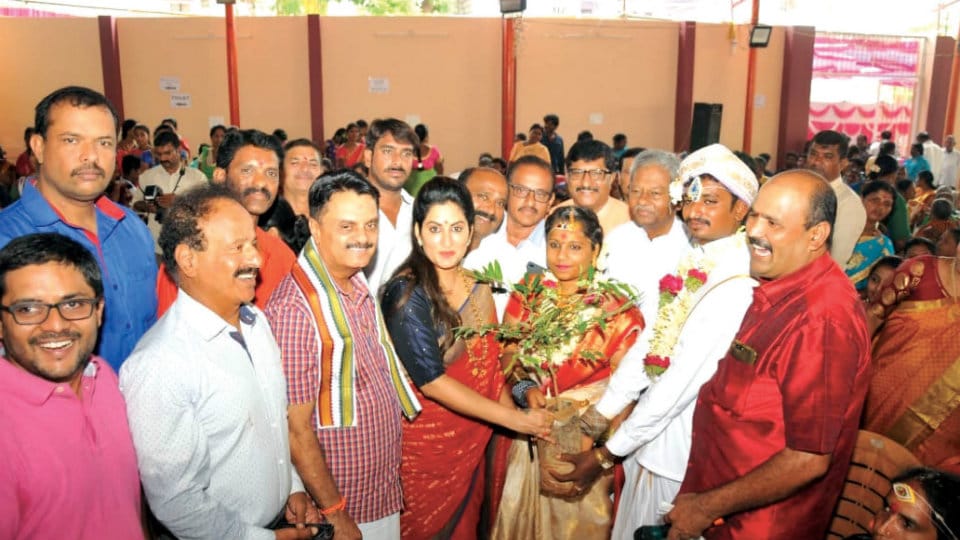 Mysuru: Seven couples, who entered into wedlock at a mass marriage organised as part of the seventh anniversary of Sri Kalyana Lakshmivenkataramanaswamy Temple on Dr. Rajkumar Road in Kalyanagiri were gifted saplings by RSS Southern Region Sanghachalak M. Venkatram, on the occasion of World Environment Day yesterday.

Speaking on the occasion, Venkatram said that mass marriages not only help in curbing huge marriage expenses but also help in saving money of the poor. In the current drought situation more and more number of mass marriages must be held. This not only helps in easing the economic burden of the poor and middle class but also helps in bonding between different communities, he added.

Mysuru District Brahmana Sabha President D.T. Prakash said that miscreants and mischief makers are posting disdainful pictures of Hindu Gods on Facebook and Whatsapp and making derogatory remarks which not only hurts the sentiments of the community but also destroys communal harmony. Such miscreants must be identified and punished, he added.

Temple founder H.G. Giridhar said that those couple who prefer simple marriages must be identified and such mass marriages be organised, thus setting an example for others to follow the ideals.